It’s not often you hear of a Good Samaritan being armed, but in the town of Early, Texas, that was exactly the case. 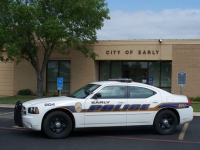 Peach House RV Park resident Vic Stacy was in his trailer when he heard shooting outside. What he heard was his neighbor Charles Ronald Conner shooting and killing fellow residents David Michael House, 58, and Iris Valentini Calaci, 57, and their dogs over an argument about their dogs defecating on his property.

According to KENS 5.com, the incident’s first officer to respond was Early Police Department Sergeant Steven Means. Upon arriving to the scene, he quickly came under fire from Conner. While the two exchanged fire, Stacy, 66, could see that Sgt. Means couldn’t get a clear shot on Conner, so he took matters into his own hands.

“I thought ‘he’s fixin’ to kill that boy,'” Stacy said to the the Brownwood Bulletin. “And that’s why I squared off and hit him in the leg and knocked him down.”

Police praised Stacy for his heroic action, because without him, Sgt. Means may not be here today. Brown County Sheriff Booby Grubbs echoed that sentiment, saying, “Had he not had a gun and the presence of mind to do this, we don’t know what the outcome would’ve been.”

You can watch an interview with Stacy about the incident below. What stories of Good Samaritans do you have to share with us?

Thank you, Mr. Stacy. May you always be remembered as a hero.