Donald Trump has a tremendous amount of support for our homeland security and his support of law enforcement, our borders, and our military has never wavered. We sent a brief note thanking him for that support, and he was kind enough to reply. 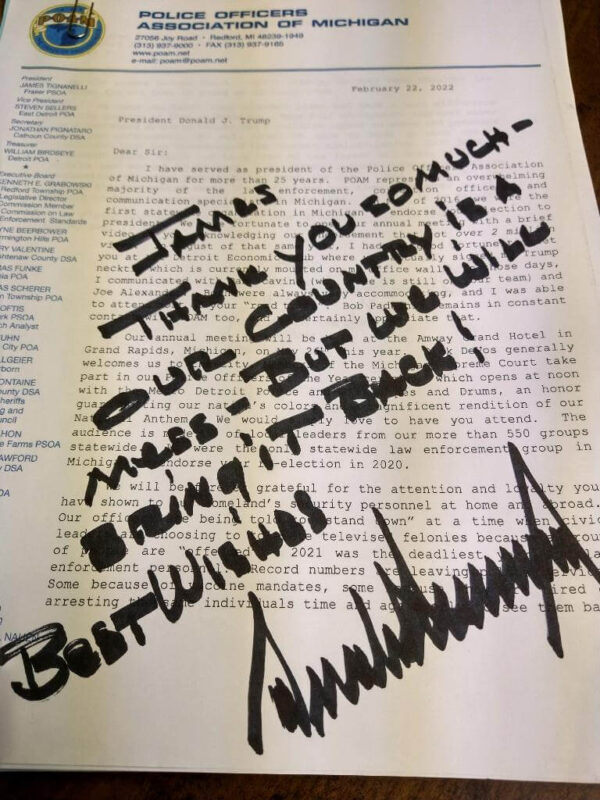 2 responses to “Former President Trump Thanks the POAM”

Donald Trump
*Pardoned criminals – Kwame Kilpatrick/Roger Stone/Michael Flynn, to name a few- Law enforcement worked hard & proved their case, but they’re Trump/Q-Anon ass kissers so they “win” pardon.
*Is a criminal himself in many aspects:
including, but not limited too: tax cheat, charity cheat, quid-pro-quo (testified to in Congress under oath by his own ambassador), sending in the clowns for “rigged elections” and one of the bigger ones: insurrection.
*Taken over 100 million dollars in tax payer money and put it in his own businesses while on taxpayer dole by flying himself to his golf courses EVERY week but 6 during his presidency.
*Misused donations including paying off hookers for NDA and continues to take huge amount of resources from the party for all the legal trouble he’s in…and where is the 250 million dollars he’s taken in to “help” other candidates gone?
**He was given 440 million dollars by his daddy and somehow blew through it all, had to take out a 100 million dollar loan on a 100 million dollar note? I thought he was a billionaire – he should just stroke the check then**

Some other high points of this guy’s “leadership”

*Lied to the military on Thanksgiving Day (on his way to one of his overseas golf courses, with and on taxpayer money) told them “at the meeting, I said 2 percent? No way, not 5 percent, I said 10 percent, you’re getting a ten percent pay increase and you have gotten one for years.” Complete lie. Not only did he not produce the 10% pay increase, it was less than some of the pay increases the military had received over the 5 years before he got in office. Lied right in the face of our military while they were overseas on the holiday and using our money to fly to his golf course out of the country.
*He’s hired illegals
*He’s stiffed working people out of their money
*….and apparently, one of the most elite law enforcement groups on earth known as the FBI has somehow had all 4 thousand agents go against him, he’s the victim, which is what every career convict like this guy is says about law enforcement.

I, for one, cannot understand why anyone is so enamored with this steaming pile of dog shit. The above notes are proven facts about this carnival barker but let’s not forget, bankrupting casino’s (After writing himself a huge bonus off other people’s money, who then got nickels on the dollar for their investment) and his new Truth Social just took a dive, with other people’s money, he had to borrow 100 million dollars to pay the note on a 100 million dollar loan, if he is such a great business man, why not just stroke the check and pay it off?

Burner phones, insurrections, pardoning of criminals and that’s just the tip of the iceberg.

The list goes on and on. He supports cops who for some reason still think he’s a good guy and can’t wait to kiss his ass – but make no mistake this guy is not a “friend” of law enforcement in any way, shape nor form, especially with all the crime he commits on a daily basis.

Trump Responsible for Criminal Insurrection – the Death of 4 WCPOs and 160 injured…
Trump want LEOs to excuse his Criminal acts – Against the American people, the US Constitution and Democracy…
Condemn Trump
David Malhalab
Sgt Detroit Police Retired