“You’ve been proving yourselves all of your careers, but now we must re-establish that we’re better than the average guy.” – Jim Tignanelli

On Wednesday, May 20th, 2015 the POAM Annual Convention commenced with a seminar dedicated to garrity, grievance and social media.

Douglas Gutscher and Chris Tomasi, and began by saying, “It has come to light that two-thirds of people don’t trust police anymore. Why? It’s because the media finds it more popular to show bad examples conduct and represent us inaccurately. Because of this, we now have to prove ourselves all over again.” He paused for a brief moment before continuing, “You’ve been proving yourselves all of your careers, but now we must re-establish that we’re better than the average guy out there.”

Douglas Gutscher, Assistant General Counsel for POAM, further explained the dangers of social media to all those in attendance. The main takeaway- “Think Before You Post!” The City of Detroit has already implemented a social media policy and other departments are following close behind, making the subject something police officers need to be more cognizant of. There are numerous examples prevalently covered in the media of police officers posting questionable content to Facebook, Twitter and Instagram, to name a few. Perhaps a controversial Facebook status was posted, a questionable picture was shared, or an officer “liked” a post that could be interpreted as racially motivated; all of these things have become grounds for termination. 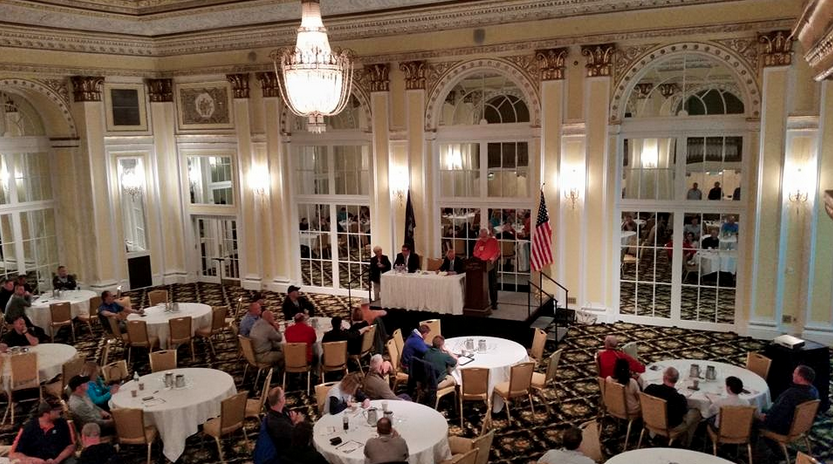 The need for social media awareness encompasses all the social media platforms, and doesn’t stop at law enforcement. Teachers have been fired for Tweeting derogatory statements about students, officers terminated for posting certain photos to Instagram- the list could continue. Aside from employment termination as a means for thinking before you write the first thing that may be on your mind, think about this, too: by posting to social media officers may come in to contact with suspects or individuals involved in a case, or inadvertently tip off an investigation without intending to. Due to the public nature of social media, it’s impossible to tell who may be watching what is posted.
Always remember, even your “private” social media accounts are still a public forum. While employers cannot demand your personal passwords in order to view your pages, whatever you’ve posted in the public domain is free to anyone to view- even your boss. If you ever heard the phrase, “nothing can be taken back once it’s posted on the Internet” that’s because once you’ve posted something, a “footprint” is created. Unfortunately, that type of footprint isn’t washed away like one that’s made in the sand.

The Moral of the Story?

In addition to social media platforms, officers must also be aware of their day-to-day cell phone use. If someone were to send a derogatory text message using a company phone, those documents could be used against him or her. A case may even be made against an individual whose work is reimbursing them for their personal phone, although it would be a difficult one.

The moral of the story? It’s better to be safe than to be sorry, in every scenario! Think before you post any type of content to social media and remember that since you’re a police officer, people are scrutinizing you even more. Stand up and embrace those high standards of conduct and encourage others to do the same!