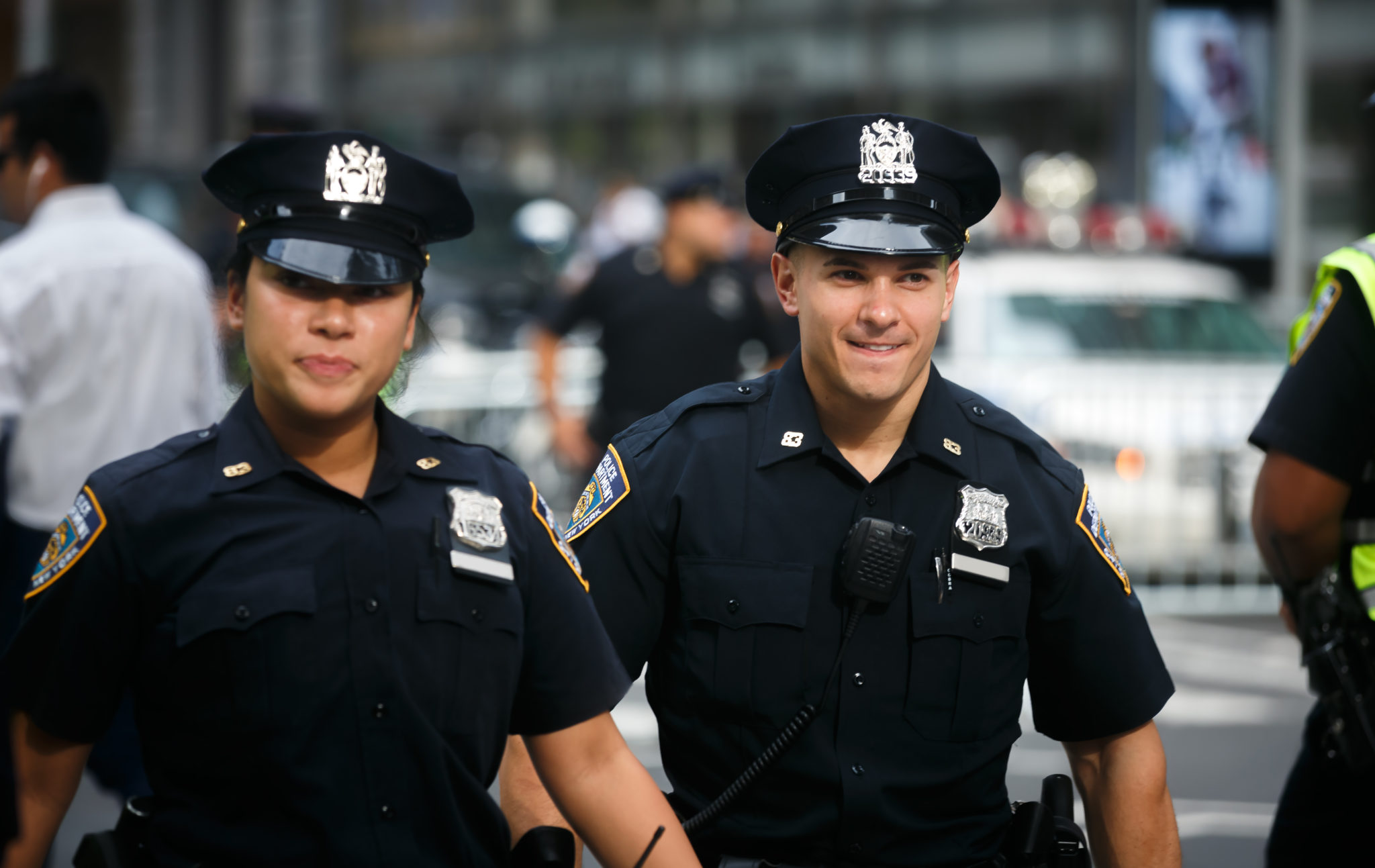 POAM is kicking off 2020 by honoring the Good Cops in-and-outside of our departments and surrounding counties. We’re excited to honor these individuals.

*DISCLAIMER: Good Cop is a separate nomination from our annual Police Officer of the Year recipients at our Annual Convention in May.

These Good Cop nominees are outstanding officers who have been nominated by friends and colleagues. Read more.

Dearborn Heights Police Department’s Officer Ahmad Mazloum is our Good Cop for the month of September. Since 2017, he has served as a police officer in this department. He is also a member of the Special Response Team. He was nominated by Ali with the following appreciation:

When Officer Mazloum is not responding to an emergency and keeping the community safe, as he did when he was involved in a shooting on August 29, 2020, he is proactively greeting the residents and kids with a kind encounter.

His professional police conduct is the police interaction the 21st Century should base standards on.

Thank you, Officer Mazloum, for your time and commitment to making communities safe.

Oak Park Public Safety’s Officer Robert Koch is our Good Cop for the month of June. He serves as a Community Resource Officer after working in various roles and spending more than 17 years with the Oak Park Department of Public Safety. He was nominated by Regina Weiss, and she said the following:

Officer Koch goes above and beyond for the City of Oak Park. He is responsible for reinstating, planning, and implementing the Oak Park Citizen’s Academy. He is present at numerous city and community events, block club meetings, etc. He has also instituted and/or helped run several programs to improve police and citizen relations, including “Coffee with a Cop,” the Oak Park Public Safety Ice Cream Truck, and a Cops vs. Kids basketball game.

During the pandemic, Officer Koch has still been serving full time and then goes home after work and sews masks to give away to the community. He then organizes mask giveaways in our city parks and at public safety. Officer Koch is also active on social media, quickly responding to citizen questions and concerns.

Thank you, Officer Koch, for your time and commitment to your community and creating new resources. Read more about his accomplishments – 2017 Employee of the Year.

Sergeant David Saad serves with the Clare City Police Department since 1999. “Prior to serving the city of Clare, Sgt. Saad worked for the Clare County Sheriff’s Office. Sgt. Saad also worked as a Corrections Officer, Marine Deputy, and Bailiff.”

Sgt. Saad was nominated as a Good Cop by Martha Youstra. She stated the following about Sgt. Saad,

This officer of 20 years is a kind, caring, and great guy. He does his job well to give the community a safe environment. He acts in a professional way, never puts on an ego attitude, and is not bias in any form.

Thank you, Sgt. Saad, for your work within the Clare community. It doesn’t go unnoticed.

Officer James, better known as Jim, Jones serves with the Marine City Police Department. He was nominated a Good Cop by John Ange.

Jim Jones had a distinguished 28-year career as a Port Huron Police Officer. During those 28 years, Jim did every job there was to do. As a St. Clair County Assistant Prosecutor, I had the privilege of working with Jim in his capacity as a patrolman, Detective, and Undercover Officer. Jim Jones is the ultimate “team player.” Jim would go anywhere and do anything the job required. He was always hard-working, honest, and a mentor to younger officers. He took that love of teaching to St. Clair County Community College (SC4) in 1997.

Last month, Jim was awarded the American Association of Community Colleges’ Dale P. Parnell Faculty Distinction Recognition for his work in making a difference in the classroom. As SC4 President Deborah Snyder said: ‘Jim has devoted his life to giving back to others, and we are thrilled to congratulate him on this prestigious award.’ Those words would be echoed by anyone who has ever worked with or been a student of Jim’s. He continues to put his training and experience to work as a part-time Marine City Police Officer. He continues to put himself at risk simply to serve the Marine City citizens. That is the essence of Officer Jim Jones.

Thank you, Officer Jones, for your dedication and service to law enforcement throughout the years.

Officer Hill stated Officer Parker is “a dedicated hard worker. Recently at the Wayne County Sheriff’s department, he helped save someone’s life by administering CPR. He is brave and good at serving the community.”

Thank you, Corporal Parker, for your service and commitment to law enforcement.

Monique has been a Sheriff Deputy for 15 years. This is her first year as a School Resource Officer. She is the supervisor of this program. Earlier this school year, she had to turn in one of her partners for exhibiting conduct unbecoming of a Sheriff Deputy. Doing this shows her great integrity. This year, she has had to deal with being bullied for doing her job. Despite the bullying, she still shows up to her job. She has a very positive attitude and makes you feel comfortable and safe in her presence. She is always very good at observing the environment she is in.

I work in an elementary school. I took her on a tour of the building I work in. She was very quick to find the areas of certain rooms that would make the students and teachers likely to be seen by a potential school shooter. When I see her interact with my students she has a smile on her face. One of my special education students especially enjoys interacting with her. As far as the school she spends the majority of her time working in, she has worked hard at developing relationships with the students at the high school.

Thank you, Deputy White, for your commitment to service, on and off-duty, and bravery to ensure safety for all.

The Office of the Genesee County Sheriff’s Deputy Greg Howard is the last Good Cop nominee for the month for February. Nominated by Deputy Stephen Messer, Deputy Howard has been a loyal member, serving within this department for over 7 years. He spent time in corrections, court security, and most recently as a patrol officer assigned to the Genesee Health Systems, a primary Genesee County public service provider for individuals with serious mental illness, intellectual/developmental disabilities, and substance use disorders.

Read more of why Deputy Howard has been nominated:

Deputy Howard works tirelessly to treat the individuals seeking mental health and substance abuse with respect and dignity. His position is not one that is glorious or sought after; however, Deputy Howard is consistently serving those in crisis and he has been successful in fostering positive relationships with individuals who most in society turn a blind eye to.

For these reasons, I think Deputy Howard exemplifies excellence in the field of law enforcement. He comes to work every day to protect and serve some of the most vulnerable among us, serving dutifully those who need the most help is something Deputy Howard takes pride in – he never asks for praise or expects recognition for doing his job. If this award is meant to recognize individuals who exemplify excellence in the field of law enforcement, I can think of no one better than him.

Thank you, Deputy Messer, for this nomination; a special thank you to Deputy Greg Howard for your exceptional determination and passion to protect and serve those who need a little more help.

In March 2019, Huron Township Police Department’s Officer Adam Sheehan responded to a house fire call that ultimately tested his heroism. He arrived at the scene of the crime, and he learned that a woman was still in the burning house. He ran inside to help get her out to safety. There were no casualties. Visit this article to learn more about the incident.

Thank you, Brian Kostielney, for submitting Officer Sheehan as a Good Cop for POAM to represent.

Ryan stated that Borowski “continuously performs to the highest standards as a police officer in most challenging environments, and as an amazing family man and friend in all communities.”

Thank you, Officer Borowski, for your service and commitment to law enforcement.

Great police officers are inspired by great leaders. This rings true for Deputy Chris Metropoulos who nominated the police officer who helped him earn the title of “cop,” Office of Genesee County Sheriff’s Deputy Collete Newman. Metropoulos shares the story below – read more.

“To explain why Newman deserves this recognition requires me to also tell my story a little. I started my career at the Sheriff’s Office in 1999. I worked 5 years in the jail, then in our radio room for 12 years. I decided after 17 years I wanted to go through the police academy. Initially, I believed after the academy I would go and finish the remainder of my time working in our courts. However, Sheriff McKenna taught in my academy and was so inspirational that I decided I needed to earn the title of ‘cop.’ I always tell people that Sheriff McKenna was so inspirational he could talk to an 80 year old woman and make her want to put on a badge and a cape and become a ‘superhero cop.’

When I was finished with the academy, I started looking for inspiration and guidance on how to earn the title. I initially returned to the radio room and had continued access to multiple police officers. As I navigated through those I work with, I found myself asking Deputy Newman more and more of the how’s and why’s on how she handled her situations in real life and hypothetical cases.

When I made my way to the road and started my journey to earn the title, Deputy Newman was always there and continued to help and assist me in any matters I had.

Deputy Newman works for the Office of Genesee County Sheriff’s department as a certified officer and as a paramedic, a double duty that most are not equipped to handle mentally and physically. However, she has been able to become the best at both. I can attest if I was in need of emergency medical services, I would hope she would be the first on the scene to render me aid; and if I needed a police officer to help me in a moment of crisis, I would hope she would be one of the first on scene.

Deputy Newman also has the distinction of being the first female we have had on the department to be a part of our containment team. No matter the task in front of her, she always pushes through it with grit and perseverance and then seeks out the next assignment.

It is my true belief that she is a ‘cop’s cop’ and deserves to be recognized for her continuous efforts to be the best she can be.”

Thank you, Deputy Chris Metropoulos, for nominating Deputy Newman. POAM appreciates you sharing the story of how you became a police officer and those who helped you along the way, as well as all of our January Good Cop nominees.

Additionally, if you would like to nominate an officer for the Police Officer of the Year Award, please nominate them here. These nominations end on Friday, March 6.