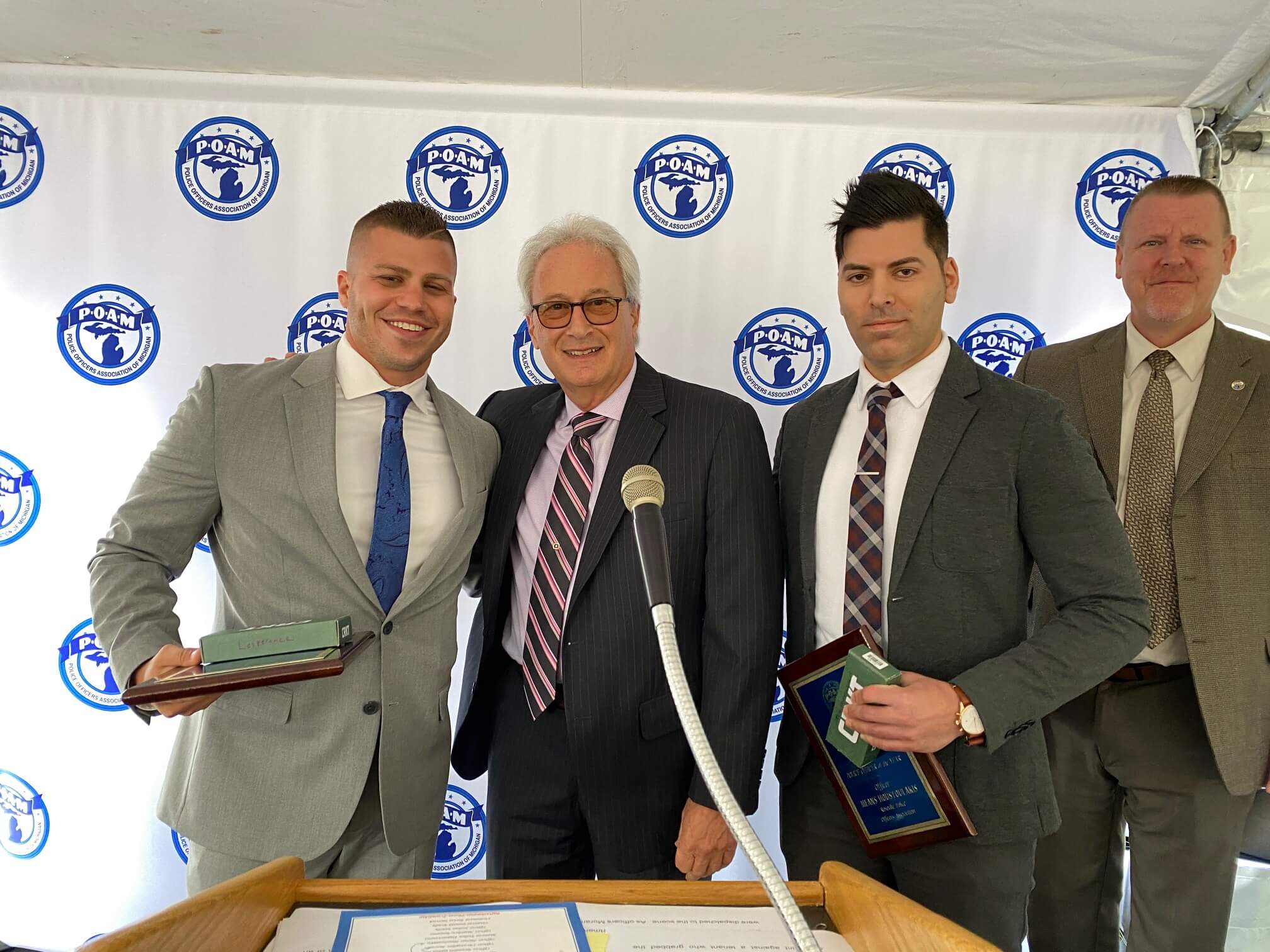 On the afternoon of March 11, 2019, the Roseville Police Department received a call from the Baymont Hotel about an armed man on the second floor of the building. By the time the police arrived the suspect had left the premises; however, reports were starting to come in of an armed man at the nearby Home Depot.

Officer Matthew Lesperance and Officer Menas Houstoulakis proceeded immediately to the scene at Home Depot. The suspect had been inside Home Depot with two other suspects, where they had caused a disturbance by waving a gun in the checkout area.

Houstoulakis, in his fully marked police vehicle, drove through the parking lot in search of the subject. When Houstoulakis saw the suspect he immediately stopped, parked his car, and confronted the suspect. Shots ensued when the suspect ran. Another officer observed that the suspect had dropped his weapon while running from Houstoulakis and communicated it to all officers involved in the incident.

It was at this time Lesperance began a foot chase of the subject. Lesperance was able to catch up to the subject and tackled him to the ground. Lesperance immediately noticed that the suspect had been shot and he advised his fellow officers of the situation.

Houstoulakis was next on the scene where he handcuffed the suspect and helped with medical aid to the suspect’s bleeding arm. The suspect was arrested and taken to a local hospital to care for his wounds. Because of Houstoulakis and Lesperance’s sense of duty and putting aside their own personal safety they were able to help contain a situation that could have turned very tragic, very quickly.

Just after 11:00 p.m. on September 2, 2019, a 911 call was made regarding a domestic disturbance. The suspect, an ex-boyfriend of one of the residents of the home, attempted to force his way into the residence. The suspect was intoxicated, had broken some windows in the home, and was reported to have a firearm.

Officers Christopher Moran & Brandon Quinn from the Roseville Police Department were dispatched to the scene. As Officers Moran and Quinn arrived in separate vehicles, they both observed the red brake lights of the suspect’s vehicle were activated. Officer Moran immediately drove up behind the vehicle, while Officer Quinn pulled into the neighbor’s driveway. As Officer Moran exited his vehicle, he saw the suspect come from the side of the house toward the passenger side of the car. There was a female subject in the driver’s seat. Officer Moran’s intention was to detain the subject for questioning, however, as he approached the suspect, Officer Moran observed the handgun the suspect had lifted and pointed at him. Officer Moran immediately retreated toward his vehicle and yelled “gun” while also drawing his own firearm.

During this time, Officer Quinn exited his vehicle and walked toward the driveway when he spotted the subject with his gun pointed at Officer Moran. In response, Officer Quinn drew his firearm and repeatedly instructed the suspect to drop his gun.

Both officers fired rounds at the suspect who ducked back into the passenger side of the car. When the suspect reappeared, the officers saw him toss his gun toward Officer Moran’s vehicle. The suspect then ran toward the house to the same side door he had recently come out of. The officers heard terrified screams from the home as Officer Moran cautiously approached the side door.

Officer Moran noticed one female escape from the home, however, there was another woman in the home, begging the suspect to surrender. It seemed the suspect was going to attempt to barricade himself in the house with her. Then, the suspect decided to surrender. He crawled out of the home on his stomach. He allowed Officer Moran to put his hands behind his back but began to resist when the cuffs were being put on him. In the meantime, Officer Quinn provided cover for Officer Moran while he attempted to cuff the suspect.

There were no signs of injury to the suspect, the victims, or the officers. The suspect was lifted to his feet and escorted to Officer Moran’s patrol vehicle. Fortunately, due to quick thinking and teamwork by both Officers Moran and Quinn, they were able to stop a situation going from bad to worse all the while placing themselves in harm’s way.