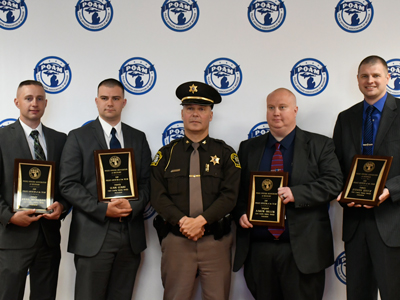 On November 21, 2018, at around 9:30 p.m., Sergeant Aaron Miller, assisted by Deputies Ryan Weakman, Steven Sentz, and Sean Gerbe, responded to a gun call at a Lincoln Township residence. A male suspect had loaded a pistol and pointed it at his wife with the intention of killing her.

The suspect told a family member he was going to die that night – indicating he had long planned to harm the victim and himself. Realizing she was in danger, the victim placed a call to 911. The suspect fled his home, carrying multiple handguns and a semi-automatic rifle.

When the four deputies arrived, they found the suspect exiting a camper with a long gun. He was heading back to the home where the victim was located. The suspect acknowledged the deputies but ignored all verbal commands to drop his weapons. Due to the significant threat the suspect posed to both the victim and the deputies, the officers confronted him in a shootout.

The four deputies displayed an incredible response to this difficult situation. Due to their swift actions and bravery, the Clare County DSA Deputies were able to save the victim’s life.

For their bravery and promptness, we would like to bestow the Police Officers Association of Michigan’s 2019 Police Officer of the Year award to Clare County DSA’s Sergeant Aaron Miller, Deputy Ryan Weakman, Deputy Steven Sentz, and Deputy Sean Gerbe.