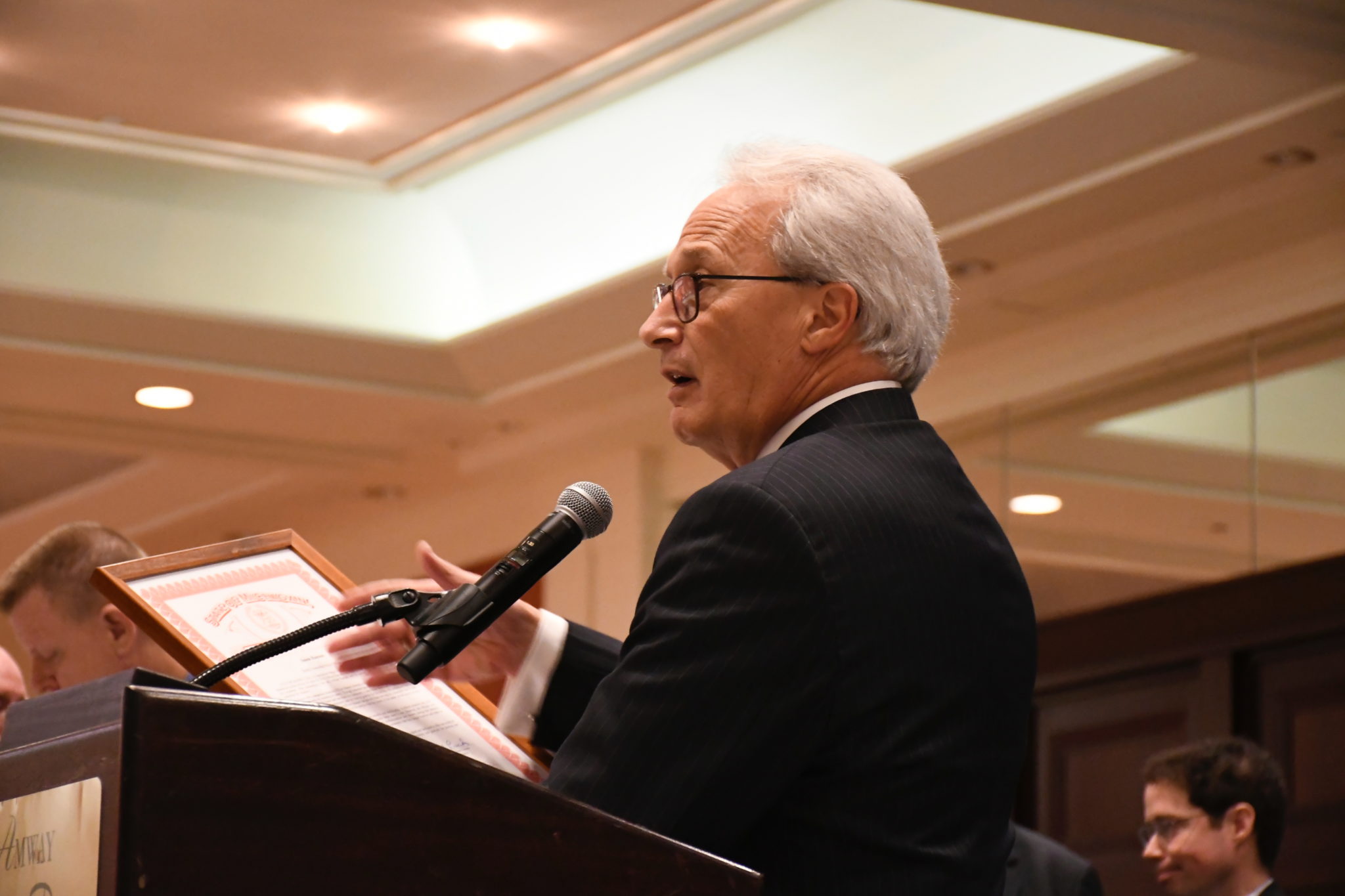 On Sunday, June 17, 2018, a “once in a thousand-year” rainstorm began in Houghton County, which led to a large influx of distress calls. Houghton County’s Sheriff Deputies Hans Tolkkinen and Angela Miles were on duty for the night field service, while Deputy Tyler Harju filled in as a shift supervisor at the station. Sergeant Brad Pelli, from Keweenaw County, also stepped in that night to assist the Houghton County deputies.

“The rain started around midnight and wasn’t slowing down; it was the heaviest rain I had ever seen,” said Deputy Tolkkinen.

Deputies Tolkkinen and Miles were dispatched by Negaunee Regional Dispatch; a basement wall had collapsed at Markham’s Marina on Houghton Canal Road, which was on the other side of an impassable, flooded section of roadway. A 12-year-old boy was trapped and buried in the mud.

Because of the road conditions, the deputies were only able to travel at 40-45 MPH without hydroplaning. At one point, Deputy Tolkkinen lost control of his patrol vehicle after hitting 12 inches of standing water. He regained control of the vehicle, but once he got to Canal Road, he realized there was no way for his car to make it all the way to Markham’s Marina.

“It was definitely a test of driving skills knowing how fast I could push it without wrecking,” said Deputy Angela Miles.

Knowing how urgent the situation was, Deputies Tolkkinen and Miles left their patrol vehicles and ran the last mile to Markham’s Marina through dangerous rain, lighting, and floodwater.

Upon arriving, the deputies found the family and a first responder from Stanton Township had already dug the child out of the mud-encased basement and were in the kitchen doing CPR. While Deputy Miles took over chest compressions, Deputy Tolkkinen hurried down to the lakeshore’s boat dock, where he found a small white boat with the keys still in it.

Since the ambulance was unable to reach the residence safely, the deputies devised an alternative plan to transport the child to the hospital. Deputy Tolkkinen shouted for the officers to bring the child to the boat. While navigating through the debris-filled canal, the boat began to sputter. Deputy Tolkkinen radioed Deputy Harju and the Regional Dispatch to have Mercy Ambulance meet them at the Hancock City Campgrounds boat launch.

Deputy Harju made arrangements to leave his desk after calling in relief. On the other side of the canal, he and Sergeant Pelii left the Houghton County Marina in the patrol boat. Together, they made their way to at the Hancock Campgrounds, where they met the boat that Deputy Tolkkinen and Miles had commandeered. There, they assisted getting the victim, first responders, father, and other deputies off the boat. Deputy Miles, still providing CPR, rode in the ambulance, while Deputy Tolkkinen and victim’s father went in the Hancock patrol car to get to the hospital.

Deputy Harju and Sergeant Pelli then made their way over to Markham’s Marina to pick up the victim’s mother so that she could get to the hospital. They stayed aboard the boat for several hours assisting the family and others in the area, then returned the commandeered boat back to its dock.

At the hospital, the ER doctors informed the parents they had a pulse on the boy and escorted them to see their son while he was being stabilized. Once fully stabilized, he was airlifted to a children’s hospital. Unfortunately, the young boy passed away after a couple of days of fighting.

The Police Officers Association of Michigan would like to award Houghton County’s Deputies Tyler Harju, Angela Miles, Hans Tolkkinen, and Keweenaw County’s Sergeant Brad Pelli for their exceptionally meritorious conduct, which involved exemplary courage, great risk, steadfast bravery, and thoroughness. We salute you all and honor you with the 2019 Police Officer of the Year Award.