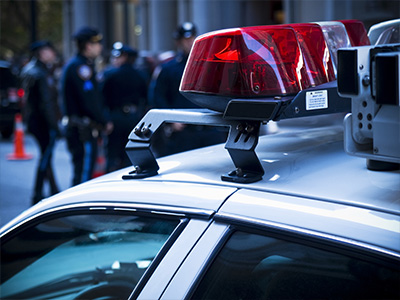 On February 1st, 2018 at approximately 11:45am, the Waterford Police Department was informed by Taylor P.D. of the possibility of an active shooter entering Pontiac, with the intention of shooting multiple victims. Waterford Township Dispatch also advised that they had received information earlier in the morning regarding a shooting in the city of Taylor, which had already resulted in a murder. The dispatcher further broadcast information that the shooter might be coming to the Pontiac area in a white semi-truck tractor that was involved in the Taylor murder. Around noon a similar vehicle was spotted in the Township.

A call came over the radio that the white tractor, wanted by Taylor, was seen leaving a business in Waterford Township. Detective Sargent Brent Ross of The Waterford Police Department, and other members of the Detective Bureau, prepared to respond to the business location. In addition, the road patrol division was sent to assist in the potential hostile situation.

Shortly after Waterford Township’s update, a uniformed patrol officer located the suspect in his truck driving away from the business where he was spotted. He followed the truck. The suspect stopped his vehicle, got out of the truck, and began shooting at the officer with an AK-47 rifle. The suspect then re-entered the truck and drove away.

All available personnel responded to the area. Detective Sergeant Ross found the shooter driving the truck on Dixie Highway. Soon after, the shooter’s semi-tractor struck another vehicle, disabling the truck. Once the shooter’s vehicle came to a stop, Detective Sergeant Ross quickly pulled behind him. Ross grabbed his shotgun, exited his vehicle to confront the shooter. The suspect got out of the semi-tractor with the rifle. Before the suspect could shoot, Detective Sargent Ross fired at the suspect with his shotgun, ending the standoff when the shooter sustained a disabling gunshot injury. The suspect was taken into custody and transported to the hospital by EMS for treatment.

Two victims were shot and killed during the suspect’s shooting spree in Taylor, with multiple victims injured. The suspect’s rounds damaged numerous vehicles and property. When the AK-47 and a large amount of ammunition were recovered from the truck it became very clear that had the shooter not been stopped by Detective Sergeant Ross, the suspect’s rampage would not have ended anytime soon. The quick response by officers and the decisive actions by Detective Sergeant Ross saved countless lives that day.

It is because of your actions, Detective Sergeant Brent Ross that we are proud to present to you the Police Officer of the Year Award.