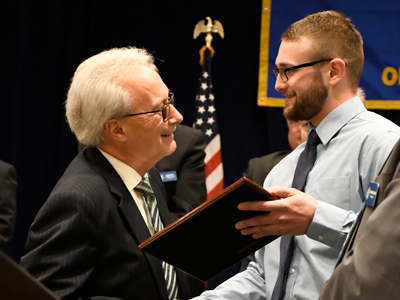 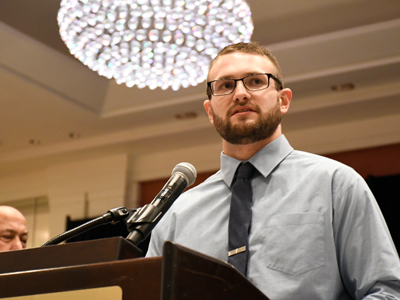 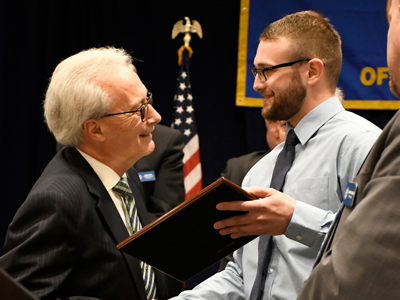 No two days are the same, especially when you’re a police officer. August 27 was no different for Officer Cory Johnson. He acted as any other police officer would by going above and beyond his call of duty to save the lives of others.

That morning, the Iron Mountain Police Department received information that a vehicle and handgun were stolen from a residence on the city’s north side. Shortly after it was reported, the stolen vehicle was found abandoned, but the handgun remained unaccounted for. Then, reports of another stolen vehicle came in, taken from the same location the first was found at.

Soon after, 911 received a report of an armed robbery taking place at an East Kingsford residence, which was a few miles from where the first stolen vehicle was abandoned. Police believed the same suspect was involved – having stolen two vehicles and a handgun.

Officer Cory Johnson, along with other Iron Mountain Police Officers, responded to the call in East Kingsford. Officer Johnson located the second stolen vehicle while driving eastbound on Boyle Drive. He activated his emergency overhead siren and lights, attempting to make a traffic stop. After seeing the lights and sirens, the suspect began to flee. He started driving north on Barton Street at an extremely high speed before turning onto a private road. Due to his speed, the suspect failed to make the full turn and wound up crashing into trees at the end of the dead-end road.

As Officer Johnson attempted to exit his vehicle, the suspect opened fire on him.

“I ducked down in the squad car and radioed to dispatch ‘shots fired, shots fired.’ After being shot at, I feared for my own safety.”

One of the bullets passed through the driver’s side window, sending flying glass and shrapnel everywhere, injuring Officer Johnson. Backup had not yet arrived, but Officer Johnson didn’t back down. He fired a total of eight shots through the front windshield of his squad car in an attempt to eliminate the threat. The suspect’s gunfire would not let up. Officer Johnson stated to the subject:

In defense of his own life and the lives of other responding officers, Officer Johnson exited his squad car firing five additional shots, using the door as concealment. The suspect was finally brought to the ground.

Within two minutes, responding officers arrived on scene to assist. Officer Johnson was immediately transported to the local hospital for his injuries. Thankfully, he is alive today to share this incredible story and continues to protect his community.

Officer Cory Johnson, the Police Officers Association of Michigan recognizes your act of duty and valor. With personifying the finest traditions of the law enforcement profession, we are honored to have you as a recipient for the 2019 Police Officer of the Year Award.