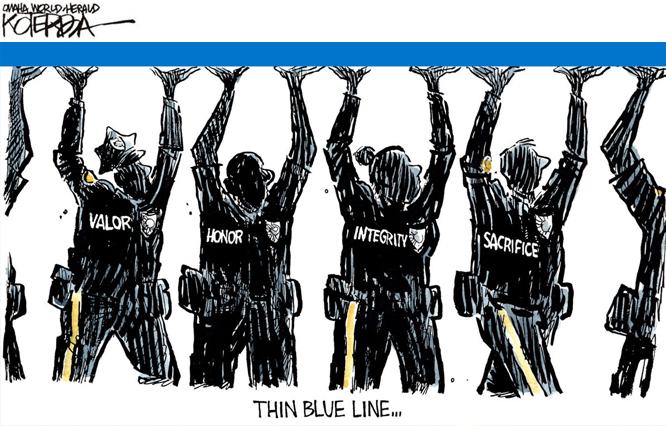 We need to talk.

Americans need a calm, measured conversation about policing and race, about the use of force and when to apply it, about perceptions, misperceptions and some very ugly truths.

It’s time to discuss the roles that mayors, governors and lawmakers across the country should play in shaping the legal processes to investigate in-custody deaths and to ensure those investigations are transparent.

But first, the shooting of law enforcement officers must stop.

Reasonable people, even when angry, don’t resort to killing. And killing those sworn to protect the public is unconscionable.

Our nation has lost 28 officers this year in the line of duty. That is up 56 percent from this time last year, according to the Law Enforcement Memorial Fund. Authorities say 14 of those deaths—including the most recent slayings in Baton Rouge and Dallas—happened in ambushes. That’s six more than in all of 2015.

Those who condone this violence as a natural expression of outrage are wrong. It puts an orderly society at risk and solves nothing. Most people understand that police officers are doing a difficult job under tremendous stress in a time of unimaginable scrutiny.

“You cannot just say, ‘F*** The Police,’” said Robert Wagner, an Omahan who won a $100,000 settlement for his treatment by police and is a leader in the local Black Lives Matter movement. “We have to find a way, and it all starts with respect. We have to respect them, that they have a job to do. And they have to respect us.”

Reason dictates that our conversation should focus on laws, policies and processes to adjudicate in-custody deaths and police use of force. If those processes are flawed, people should push to improve them through policies and legislation, not through violent disruption.

Other reasonable steps worth considering: More agencies could require officers to take the Department of Justice’s anti-bias training, as Omaha police did in 2015. Law enforcement agencies could be more proactive in explaining why and when they use force, even if it requires opening use-of-force policies to scrutiny.

The root of much of the strife across our country is historical, institutional mistreatment of African-Americans, including by police. It’s important, even in the chaos of the past few weeks, to remember that complaints about mistreatment by some police officers are sometimes valid.

Yet none of that justifies violence against police.

Painting officers with broad-brush assumptions is as wrong as painting members of minority groups with sweeping assumptions. We saw the chaos that resulted in Ferguson, Missouri, when people leaped to conclusions.

Violence is not the way.

We need to talk. And soon.

Ed. Note: This outstanding editorial was sent to us by the Omaha Police Officers Association. It originally appeared in the Omaha World Herald. We hope you enjoy this fantastic article!