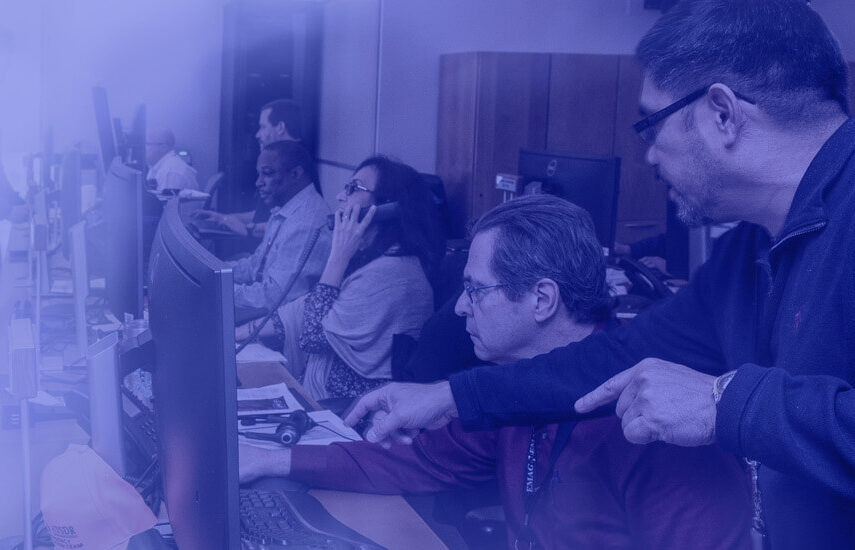 “The long hours and the overtime and the stress of the job is what finally broke the camel’s back,” Jones said of her years with the South East Regional Emergency Services Authority (SERESA), which fields emergency calls for four communities in southeast Macomb County.

Like dispatchers at 911 call centers across Michigan, Jones said she was ground down by 12-hour shifts that routinely turned into 16-hour marathons — because the call center was short dispatchers. At times, she worked seven straight days of 12-hour shifts.

Short on sleep, overweight from stress-induced eating, and on three medications for high blood pressure, Jones said she began to fear she might make a fatal mistake.

“That’s exhausting,” she said. “That’s not something that should be asked of anybody, let alone somebody whose job has people’s lives at stake.”

SERESA is currently five dispatchers short of its full staff level of 21 — which is hardly the worst staffing gap among Michigan’s 136 emergency call centers. And officials warn these shortages do more than burn out dispatchers — they also add vital seconds to the time it takes operators to answer emergency calls.

Susan Brockmann, a business agent for the union which represents the Saginaw dispatchers, told Bridge that gap is pushing many dispatchers to the breaking point.

“I have some who are going 12, 13 days of 12-hour shifts with no time off. They are beyond exhausted. No one can keep going on a job like that without rest,” Brockmann said.

“It’s a real hard job and we have a high washout rate in training. Fifty percent of the people who start the training program won’t make it through six months,” Izworski told Bridge.

While there’s no statewide database that tracks staffing at Michigan emergency call centers, Jeffrey Troyer, chairman of the Michigan State 911 Committee, a group of public safety, private sector, and industry officials that promotes 911 services, said vacancies ranging from 20 percent to 30 percent are common.

“It’s a challenge for the majority of centers statewide. It’s been this way for a while,” Troyer told Bridge. He said the shortage deepened with the COVID-19 pandemic, as dispatchers leave the field for jobs where they can make comparable wages minus the stress. Others take a pay cut to leave.

Troyer is also executive director of the Kalamazoo County Consolidated Dispatch Authority, which is short-staffed as well, with 47 dispatchers, 11 below its full staffing level of 58 operators.

Michigan 911 dispatchers answered nearly 6 million emergency calls in 2020, making them a critical link for police, fire, and emergency medical response. When the link frays, it can threaten the broader system.

Officials at the National Emergency Number Association, a Virginia-based nonprofit advocacy organization for 911 systems, said Michigan is by no means alone as it grapples with staffing woes and their consequences.

In St. Louis, 36 percent of callers to the city’s dispatch center were on hold for 10 seconds or more during a four-month period in 2021; 21 percent waited at least 40 seconds and 5 percent, or 6,000 callers, were on hold for at least two minutes. On one shift that year, when the center was 30 percent short of full staffing, it reported the 911 answer wait time was eight minutes.

Heinze also pointed to Broward County in Florida, where officials scrambled earlier this year to fill nearly 90 dispatcher jobs amid reports that shortages left thousands of 911 calls unanswered. In the state of Washington, state police closed a rural dispatch center because it was so short-staffed.

“The pandemic has made staffing difficult on every level having anything to do with public safety,” Heinze said.

“We are dealing with a lot more people who specifically want to work from home. In public safety, you don’t get that choice. You have to come in to work.”

And Heinze said staffing shortages feed a vicious circle, where mandated overtime builds on-the-job stress among dispatchers, pushing more out of the field. That adds pressure on call centers to hire new recruits, where high washout rates are the rule.

A 2019 study by University of California-Berkeley researchers found that 43 percent of 911 operators exhibited “high levels” of job burnout, rates higher than those of nurses, physicians, and teachers. Researchers also found workers were at greater risk for post-traumatic stress disorder, particularly when dealing with calls related to the injury or death of a child, threat of suicide, or the unexpected death of an adult.

But it’s not a field it would seem that many enter for financial reward, as Michigan dispatchers in 2021 earned an average wage $21.66 an hour and had annual earnings of $45,050.

In Michigan, emergency call centers rely on state and local monthly fees assessed to individual mobile devices, local general funds and millage, and other receipts to fund operations. In 2020, according to a report to the legislature by the State 911 Committee, call centers collectively received $275 million in funding.

Hiring standards vary among 911 dispatch centers, with many requiring only a high school degree. Oakland County’s central dispatch, on the other hand, requires 24 hours of college credit, six months of experience at another emergency call center, or certification in two dispatcher proficiency programs.

Under state regulations governing dispatchers, they must complete a state-approved 40-hour basic training course within 18 months of hiring and a more advanced 40-hour course within 24 months, including sections on domestic violence, suicide intervention, and stress management.

“Our full staffing level is 11. A year ago, I had five,” Lowell told Bridge, adding that she worked 100-hour weeks herself to fill the void.

In May 2021, Lowell said, the authority board bumped the starting pay for dispatchers to $16.32 an hour. That seemed to stem the tide of departures.

“I am finally fully staffed. Money plays a factor in it,” Lowell said.

Back in Macomb County, Lorryn Wietecha quit her job with SERESA in May after more than eight years as a dispatcher.

She told Bridge she was routinely forced to work overtime to cover staff shortages, sometimes checking in for a 12-hour shift from 7 a.m. to 7 p.m., only to find out the call center was short an overnight staffer. She said she would be told to report at 3 a.m. the next morning to fill the spot.

“I was depressed. I was exhausted. I had anxiety. I took medication to help me sleep because I couldn’t fall asleep at night.”

Still, Wietecha said, a part of her hated to leave a job that filled her with pride.

“I saved some lives. I have given birth to babies. I’ve been on the phone when people take their last breath. I could hold my head high and say I was a first responder.”

But in the end, Wietecha decided she no longer wanted to risk the job’s cost to her mental state. Money was not the deciding issue.

“It’s officer safety that I worried about. If you think about it, if I am exhausted and completely run down, you’re putting an officer’s life in my hands. You make mistakes.”

Instead, Wietecha took a job with the state of Michigan as a Medicaid eligibility specialist.

“It was a pay cut. But it was no overtime, no weekends, no holidays, Monday through Friday, 8 to 5. That’s what sold it. I was home for Memorial Day. I think it was the first time I was home for that holiday. “

Former SERESA dispatcher Stacy Jones, a mother of four, made a similar calculation when she turned in her resignation in January.

She now works as a dispatcher for a utility company, on the overnight shift. Regular hours. No forced overtime. Jones figures it’s already paying dividends.

“Three months after leaving, I was down to one blood pressure medication,” she said. “I lost 20 pounds. My kids are happy.”