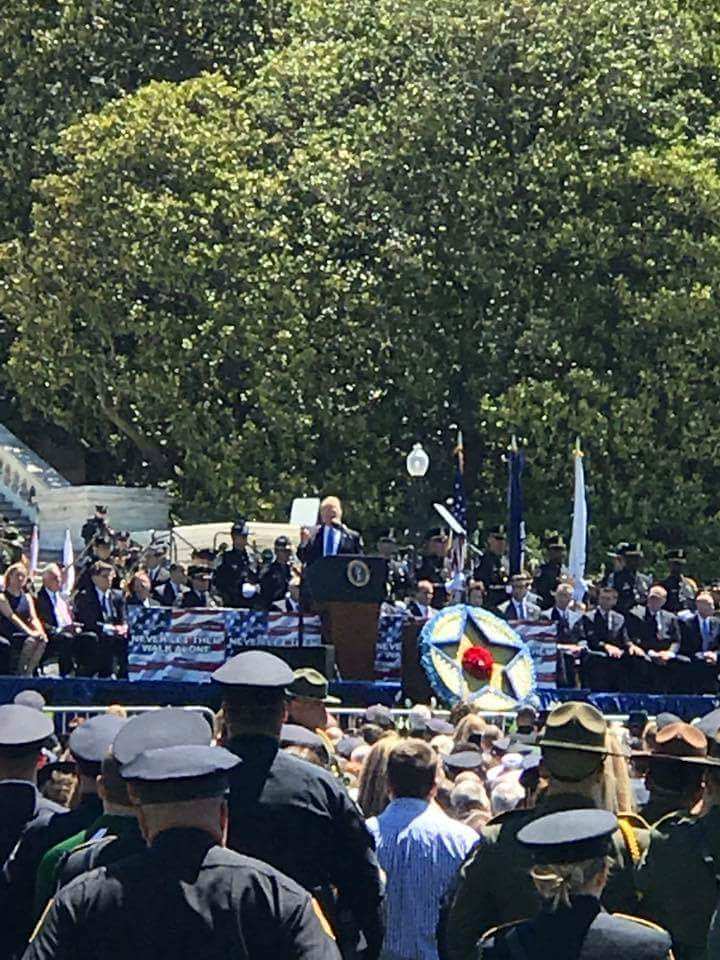 Every year POAM goes to Washington D.C. to participate in Police Week. Here’s a recap of some of the week’s events.

The Candlelight Vigil has been taking place since the mid 90’s when George H. Walker Bush opened the property for the memorial. The event is held every single year on the 13th, no matter what.

The Tune Inn Police Reception was a great success this year. We hosted at least 300-400 police officers throughout the night. Officers from all over the world were in attendance this year. You truly meet so many amazing people, connect with them and hear their stories.

Read all about the 2017 Tune Inn Police Reception HERE!

Police Memorial Day at the Capitol

POAM started attending in the 90’s but it became more of an annual event for us in 2000. That’s because it became very personal for POAM President, Jim Tignanelli, when his good friend Chris passed. Chris was added to the Memorial Wall in 2001 and each year since POAM has attended in remembrance.

Visiting the Memorial Wall is always emotional. Wives sit cross-legged on the ground, paying tribute to their late husbands. It’s potentially the first time she’s seen his name memorialized there in stone and it brings a sense of closure. He’s really gone, it’s ok. There he is. He’ll never be forgotten.

This year we witnessed a little boy walk up to the wall where his daddy’s name was. He placed a piece of paper on the ground. As we walked closer we realized what it was. He had written a letter to his father telling him all about his good grades and how he was doing so well in school. He wanted his daddy to know how good he was doing and to just feel like he was still there – still part of his life.

After attending Police Week and being incredibly touched in the past years, 2002 brought a new meaning. After 9/11, Tignanelli felt like he needed to go to Walter Reed and just do a little more. So, he paid a visit to Congressman Mike Walters and presented an idea. What has transpired since then during our annual Walter Reed visit has been one of the most rewarding efforts.

This year at Walter Reed was a little different than most. We’re happy to report that the number of soldiers passing through is decreasing and many are in rehabilitation programs. However, we met a few incredible individuals who had been in combat on Friday and had already arrived at Walter Reed by Monday.

We passed out 7 stocked bags, each worth over $1,000. We met two Navy Seals and their incredibly grateful families who had both been in the fight that Friday. As we walked in to one soldier’s room, we just took stock of him. He was a smaller guy, but built like a brick house. He had been shot in the soldier and sustained a few other combat-related injuries.

“Thank you for coming, Sir.” he said, “You walking in here today is great. It’s really great what you’re doing, Sir.”

Clyde Compton is a Vietnam War veteran who has given not only both of his legs for our country, but his eyesight for the past 20 years as well.

Located in the Blue Ridge Mountains outside of Lebanon, Virginia, we met on a 400 acre piece of land with 10 miles of streams. An absolutely gorgeous backdrop, it was the perfect place to surprise Clyde.

One response to “Police Week 2017 Recap”

Police in N.S.W, Australia keep the 29 September each year as our memorial day for Police killed in the execution of their duties. Recently I visited Hoonah, Alaska and in their main street saw a memorial to two Police killed at that location in 2010. Its sad to see such a permanent marker that makes all Police realize the dangers associated with Policing world wide. I am am retired Police Officer who served for 36 years in NSW, Australia .Our Police Force comprises of 16,000 sworn Officers with 4,000 ancillary staff making it one of the biggest in the world.