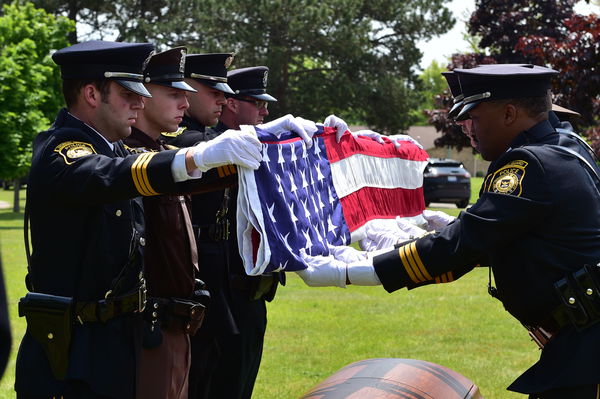 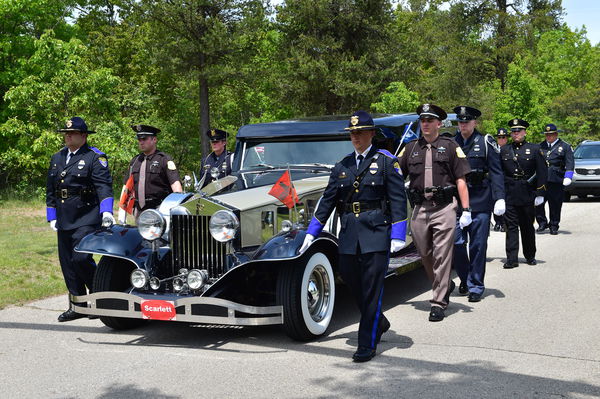 “I wanted to extend my personal thanks and make sure everyone at POAM understands just how much it means that you support this Honor Guard training.

It can, at times, be hard to understand but this school deals with pride, integrity, morals, standards, and values. These are all items that we want in our law enforcement officers and it instills in them to care for our fallen and their families when that last full measure of devotion has been given by their loved ones.

It is both a blessing and a curse to have such interest to attend. It’s the the proverbial catch 22. While I wish we didn’t have to teach such a class I am always privileged to be allowed to hold it and proud to be involved in the next generation that will hopefully carry the torch for the next officer and their family.

I know you’re all busy but if you would care to check out some images from this year’s school, it will give you a better understanding of how things went.” – Dan Foley

In 1998 the Goshen, Indiana Police Department suffered the loss of Officer Goodwin.  They attempted to handle the funeral and quickly realized that even though they provided their best in heart and tribute, this fell short of what he should have received for his sacrifice.  Shortly after, members of their honor guard team received formal training which included training with the US 3rd Infantry Regiment “The Old Guard” at Ft. Myer, VA (Arlington National Cemetery). Soon after, they began training other agencies on how to handle funeral services for the line of duty funerals. This became the Goshen Police Honor Guard Training Camp.

Dan Foley (retired Wyandotte Police Department today) had been with Wyandotte PD since 1986 and been on the honor guard since shortly after being sworn in. Dan attended this training in late 2003 and shortly after became one of the school instructors.  Shortly after that, due to the overwhelming success of this training, requests began to come in for instructors to travel to other agencies to instruct this school. At that time, a sister agency was born, called DFL Honor Guard Training.

As with most of our instructors, we have attended training with The Old Guard, some of us several times, and some have attended other specialty training as well (US Air Force Ceremonial Guard, etc).  All instructors are active and continue to serve their teams or the law enforcement profession.

In 2003, Deputy Kevin Sherwood of the Clare County Sheriff’s Office was killed in the line of duty. It was at that time the Michigan Sheriff’s Association formed S.M.A.R.T. (Sheriff’s Memorial Assistance Response Team) and they began to offer formal assistance to agencies who may need help during the line of duty funerals.

About 2006 Foley began to coordinate and host this training annually here in Wyandotte. The school was an overwhelming success; so much so that it has been booked nearly to capacity with standing room only from early on.

Because of Foley’s involvement and association with many of the instructors, he was asked to serve on the S.M.A.R.T. team. Shortly after his retirement in 2011, the Michigan Association of Chiefs of Police became a team member as well. This changed the acronym from S.M.A.R.T. to S.M.M.A.R.T. (Sheriff’s AND Municipal Memorial Assistance Response Team).

Please refer to the following link for more information.

Honor Guard training is offered in an effort to instill the understanding of what it will require for any First Responder to handle a line of duty funeral.  Many individuals have only seen what these funerals are like on TV or in videos; many of which are services held in Arlington National Cemetery. They also may be during a time when our state has lost a law enforcement officer or firefighter. Few can ever understand the efforts that take place behind the scenes, for up to a week in advance, in an effort to coordinate a line of duty funeral for the fallen.

Honor Guard School trains students on basic protocol and ceremonial practices, as well as flag law and flag etiquette when handling the National Color. They are also provided with guidelines on how to handle situations as they arise when an officer or firefighter is killed in the line of duty or any other ceremonial event that may take place at their agency.

Ultimately this training serves the families of our fallen heroes, as well as the agencies they serve. We serve the State of Michigan and our profession by offering our absolute finest in tribute to whoever may have laid their lives down in the line of duty. We’ve been blessed to train Michigan’s finest firefighters and EMS personnel.

We’ve also been privileged to have had direct input and attendance by several of our nation’s most honored soldiers who were stationed at the Tomb of the Unknown Soldier in Arlington National Cemetery assist with the school. While the S.M.M.A.R.T. team may handle, upon request from any law enforcement agency within this state and provide them with assistance during their time of need, the training itself is open to all first responders on a first-come, first registered basis.

How The Most Recent Honor Guard School Went

Michigan has embraced what we do to a level that is difficult to explain. It’s truly a calling to do this job.  Through the years we’ve earned a solid reputation for providing some of the absolute finest, world-class ceremonial training available anywhere. This has been done by treating those who attend professionally and by also providing them with the personal attention that they do not find at any other school.

From the moment attendees step into our facility at pre-registration on Sunday evening, until graduation completes on Friday afternoon the tone is clearly set of what is expected while they are with us for the week.

The class is demanding and progressive with no downtime whatsoever. When formation begins, students are expected to be there and on time. Until they are released for the day, unless attending classroom lectures, they are on their feet continuously moving.  There is no other way for them to be instructed other than hands-on, from marching, casket movement, casket watch, flag fold, firing party, color guard, and more. This is a hands-on class.

In the school, we have a saying: “Honor Earned, Never Given”.  We do not hand out honors to just anyone for any reason. People must earn this right. Just as with that, the students are earning the right to handle these services. By the end of the training, they all have a better understanding of what it will take of them to do so.

Each time one of these students participates in a funeral service they will give a little piece of themselves.

In each class, we honor the life of a fallen Michigan law enforcement officer or firefighter.  We have invited this family to attend the memorial service, to be held in their loved ones’ honor and memory on Friday. The school is advised that the night before (Sunday) Michigan lost a police officer or firefighter in the line and we actually use the precise historical details surrounding an actual death that has taken place.

Click On Each Of The Photos Below To Expand The Full Gallery. 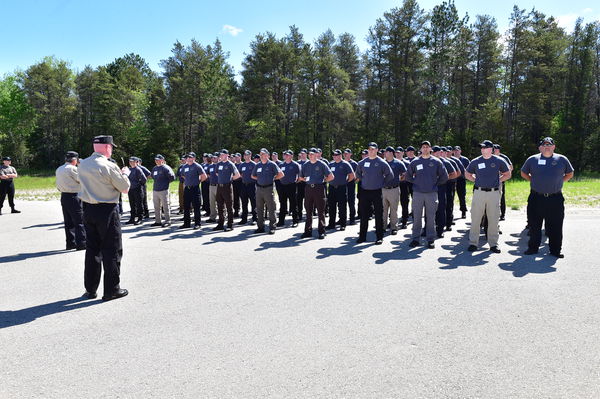 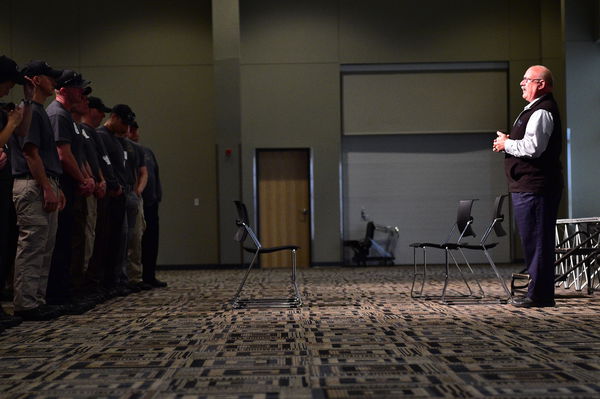 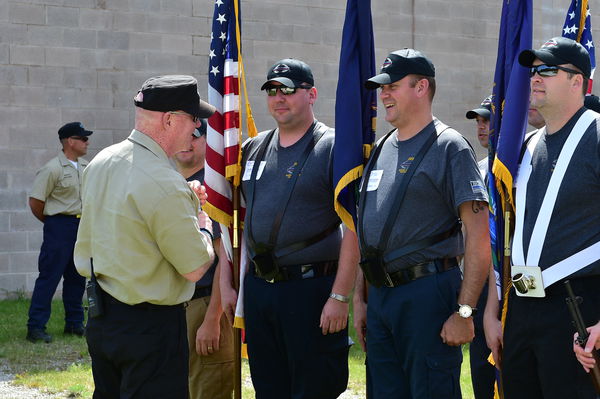 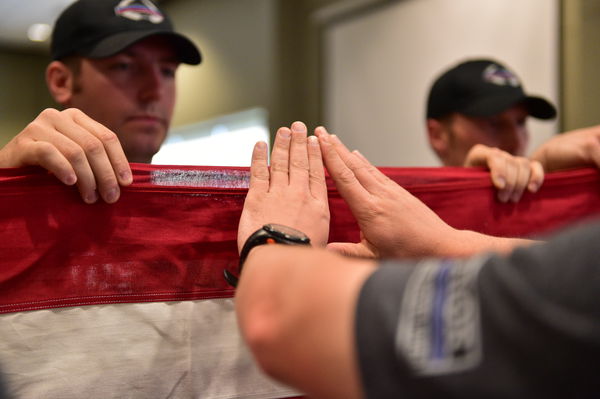 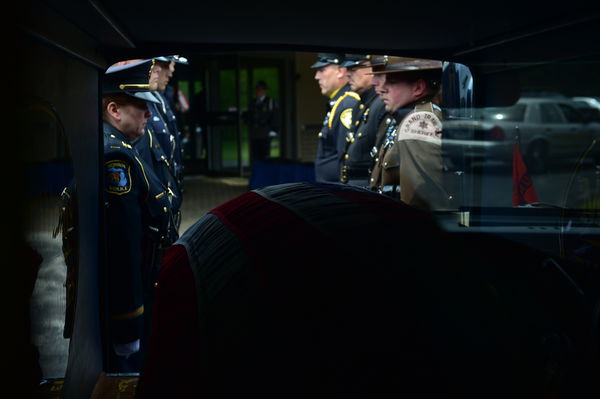 One response to “Honoring the Fallen: Honor Guard School”

While my friend, Dan (Axle) Foley creates perfection from his students, he does so because of the example he is and has always been. An incomparable and dedicated individual.