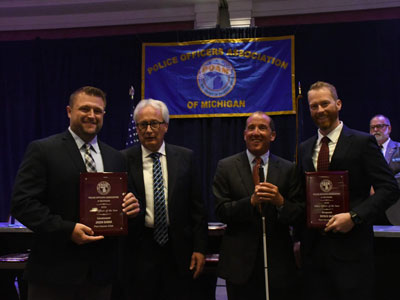 In the wee hours of the morning on February 21, 2021, a fire started in a home that was split into three apartments in the 800 block of Stone Street in Port Huron. While on a routine patrol, Port Huron Police, Sergeant Patrick Eash noticed what appeared to be smoke in the air. He began to circle the area in an attempt to find the source. He knew he was close because the smoke had become thicker, and he began to smell it.

Within a short period of time, after Sergeant Eash began his search to find the smoke, Central Dispatch reported possible structure fire on Stone Street. Since Sergeant Eash was just a few blocks away, he quickly proceeded to the area. Once he arrived, he saw the smoke was billowing out of the structure. The sergeant was flagged down by a man who identified himself as a tenant of the apartment. The tenant told him that he and his family were all out, but that there was a man trapped in the rear apartment.

The instant the door opened, smoke and intense heat escaped engulfing both officers. Sergeant Eash yelled inside the apartment but received no response. The officer’s flashlights were barely helpful in the thick smoke, but they did slightly illuminate a tennis shoe on the kitchen floor. Sergeant Eash leaned down lower and realized the shoes were actually being worn by a man lying unconscious on his back. Sergeant Eash instantaneously crawled into the heat and smoke toward the unconscious man. Sergeant Eash was able to reach the victim’s foot and grabbed it, then he proceeded to drag the body closer to the door. By this time, Lieutenant Barna was next to him, and he grabbed the other foot.

Together, they pulled the victim out of the burning building to an outside area out of the smoke, so they could perform lifesaving maneuvers on him. The victim was not breathing, and his eyes were glassed over and dark. The unconscious man had soot around his mouth and nose. The victim exhibited signs that he was near death. Both Officers Eash and Barna administered CPR to him, and eventually, a bag-valve-mask (BVM) had to be used before the victim began to breathe on his own again. He was then taken to the hospital, where a full recovery was expected.

If it had not been for the valiant efforts of Sergeant Eash and Lieutenant Barna, along with their lack of concern for personal safety that night, there would have been not just the loss of personal belongings but a tragic loss of life that night. For your bravery and exceptional police work, the Police Officers Association of Michigan presents you with the 2020 Police Officers of the Year Awards.

2 responses to “2021 P.O. of the Year: Sergeant Patrick Eash and Lieutenant Jason Barna”

Congratulations to both Officers.❗Well deserved. Both Officers are a true representation of a professional and exemplary Police Department.

Officer Eash has always been a hero to us. Not only has he saved this man’s life but he also taught the DARE program for several years to many 5th graders. You definitely need constant thinking on your feet for that adventure!