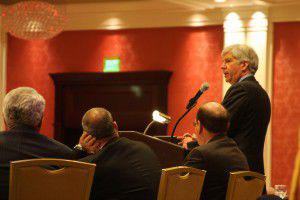 Michigan Gov. Rick Snyder, was the last to speak at the POAM 2012 Annual Convention and he touched on a variety of topics. The Republican governor spoke about how Michigan is a “comeback state” and that while no one is satisfied with where we are currently, we are headed in the right direction. He also said it’s important to know that we can’t fix everything at one time and that we are going to reinvent the State.

The governor added that one of the most important things for the State of Michigan is to make it a safer place by using data-driven public safety. He said that we should look at the numbers and go where the problems are. Michigan has four cities–Detroit, Saginaw, Flint and Pontiac–on the top 10 list of America’s most dangerous cities, and that’s something that needs to change. The governor made sure to point out that fixing those cities is only a starting point. His administration is focusing its efforts in those locations and branching out into the rest of the state.

Gov. Snyder took several questions from the POAM membership after his presentation. To hear his answers to those questions, please listen to his speech below.