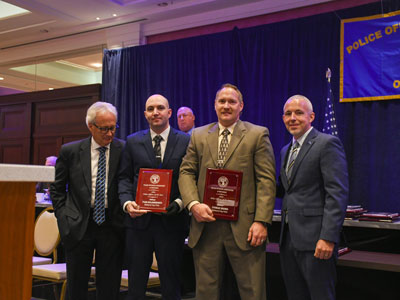 On December 24, 2020, Christmas Eve, a tragedy occurred. A domestic assault was reported at a residence in the 1500 block of West Union Street in the city of Midland. Officers Charles Brown and Tyler Hollingsworth were dispatched to the home. When the officers arrived on the scene, they made immediate contact with the victim of the assault and were able to talk with her to ascertain the situation. They learned the perpetrator who committed the assault might still be in the house.

When they cleared the house and finished their discussion with the victim, the officers began to search the property for the suspect. They found the perpetrator as they entered the detached garage, only to find the suspect pouring gasoline on himself.

Instantly the officers attempted to stop and contain the suspect, but he struggled with them. Suddenly, an explosion occurred. All three men and the garage became engulfed in flames. Officers Brown and Hollingsworth managed to escape the garage, and they began to roll on the ground to extinguish the flames on their uniforms.

When the officers were able to contain the flames, they saw the suspect come out of the fiery building completely consumed in flames. Without concern for himself or his own burn injuries, Officer Hollingsworth immediately took off his uniform coat, covered the suspect, and extinguished the flames. Simultaneously, Officer Brown also ignoring his injuries radioed to central dispatch with all the pertinent information needed to request EMS, the fire department, and additional officers to help control the situation.

Officer Brown then noticed that in spite of the fact Officer Hollingworth was able to smother the flames on the suspect, the man was still intent on walking back into the burning garage. Officer Brown grabbed the man and was able to stop him and guide him to the curb away from the house and the blazing garage that by this time was completely engulfed in flames with small explosions coming from the structure.

All three burn victims were transported to the hospital for burns on their faces, hands, and arms. Officer Brown recovered fairly quickly from his burn injuries; however, Officer Hollingworth has had to undergo multiple surgeries since the incident. Sadly, the suspect died from his wounds, but the heroism and professionalism of both Officers Brown and Hollingsworth must be recognized and acknowledged as they went above and beyond to try to save the suspect with total disregard for their own safety.