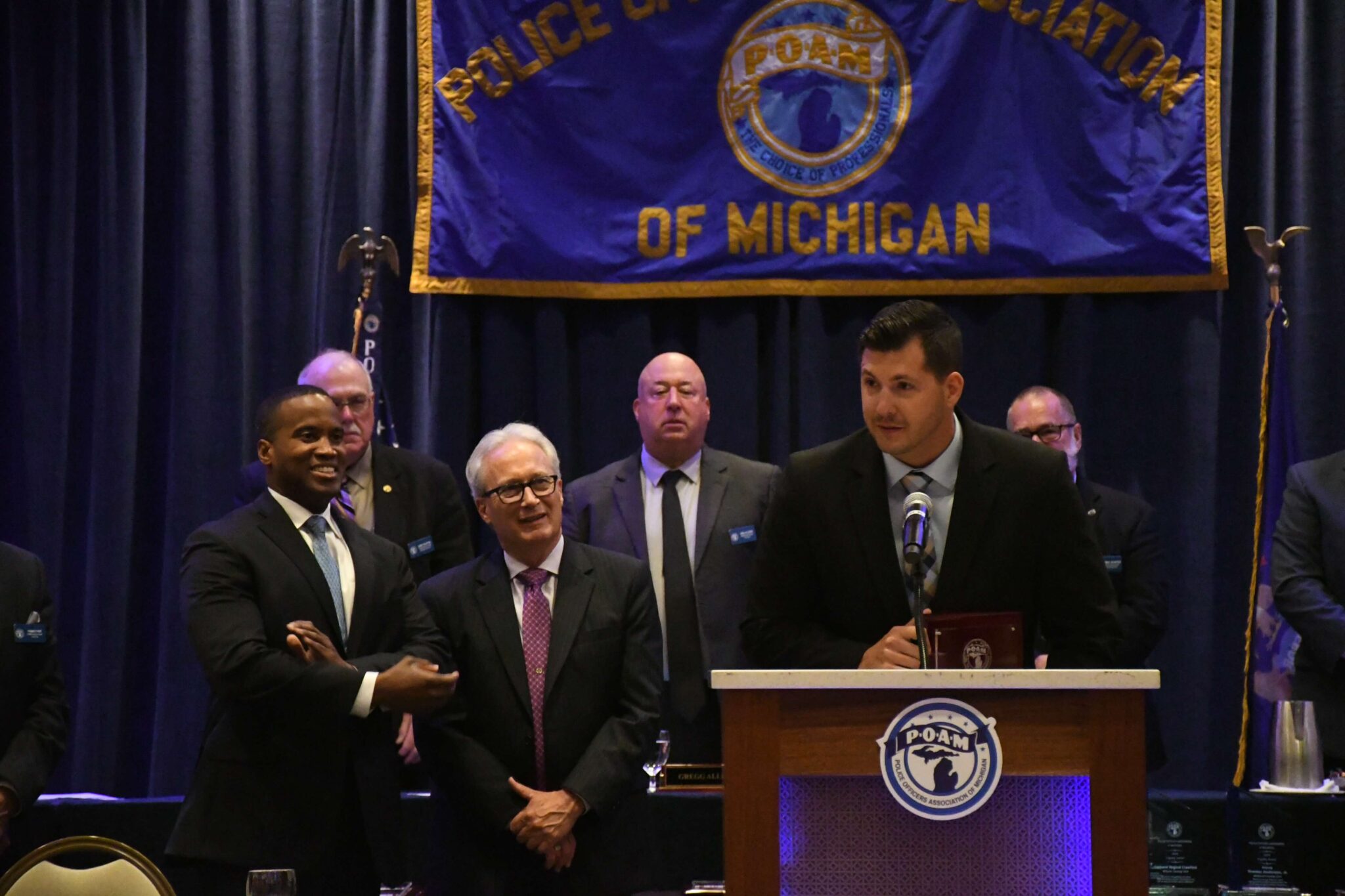 Each year, the Police Officers Association of Michigan recognizes exemplary police officers who have gone over and beyond their line of duty. Croswell Police Officer Zachary Overstreet was the first responder in a fire that blazed an apartment at 70 North Howard Avenue on June 5, 2021. On the day of the fire, Officer Overstreet was patrolling the area of W. Sanborn Avenue and Nimms Street when he received a call from dispatch. Upon arriving at the scene at around 0120 hours, he saw an orange glow engulfing the second story of the Smokers Paradise building.

Then he saw three people leaning out of the building’s second-story window. They were identified as a small family, including a husband, wife, and their infant child. He promptly radioed dispatch to send for the fire department, but he knew he had to do something. There were possibly more people trapped in that building.

With his quick thinking, Officer Overstreet ran back to his police car and grabbed a fire extinguisher. He ran to the east side of the building, where most of the fire was coming from. But his efforts to enter the building proved to be in vain as the fire was too big. He returned to the family and tried to keep them as calm as possible. The wife later revealed that she had two other teenage sons, also in the building, who wouldn’t wake up.

Officer Overstreet urged her to knock harder on their doors to wake them up. After a moment, two other figures emerged from the side windows. Officer Overstreet knew that the clock was ticking as black smoke billowed from the building. It later happened that a motorcycle pulled up, and the driver asked if there was anything he could do to help. Since he lived around the area, Officer Overstreet asked if he could bring back a ladder. The driver did not disappoint and promptly returned with the ladder.

Officer Overstreet used this ladder to climb up and remove the family from the building, which was slowly being engulfed in flames. The first to be rescued were the two teenage boys, followed by their father, and the infant. The last to be removed from the building was their matriarch.

The fire department arrived and was notified that everyone was evacuated — there were no casualties. After the upstairs apartment was cleared, Officer Overstreet ran to the back of the building to ensure that it was also cleared and that no other people were left in the building.

Courageous Actions to Save Lives

The fire had since jumped to 72 N. Howard Avenue and Officer Overstreet, along with the firefighters from 328 and Elk Fire Department cleared the buildings in that area. The buildings, which housed a barbershop and some apartments, were unoccupied at the time of the fire. Later, it was discovered that the family’s bonfire, which was put out before going to bed, was the cause of this incident.

With his quick thinking and boundless courage, Officer Zachary Overstreet was able to rescue a family of five that day. He also averted possible extensive damages to the surrounding properties. For this courage, we, the Police Officers Association of Michigan, present you with the 2022 Police Officer of the Year Award.