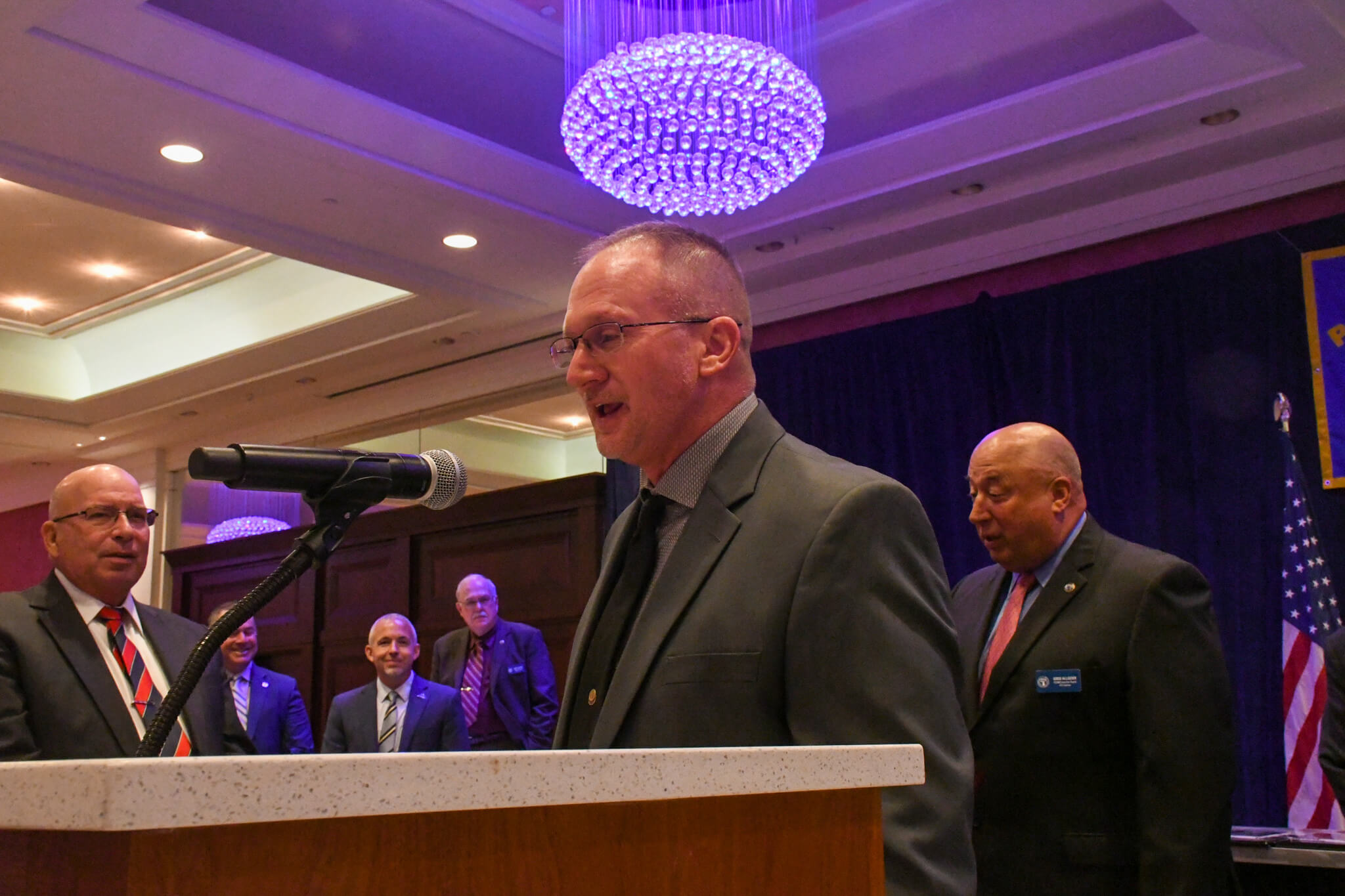 On August 25, 2020, Albion Department of Public Safety (ADPS) Officer Dan Riley was instrumental in his actions that saved the life of a fellow officer, Sergeant Chris Ambrose of the Marshall Police Department. This lifesaving event occurred during a stand-off with an armed and dangerous subject.

The suspect, who earlier in the day had committed previous crimes, was on the run and attempting to hide from police searching for him. It was then that he unlawfully broke into a home on Division Drive, outside the city of Marshall in Calhoun County. The residence was occupied at the time by its elderly homeowners. Fortunately, the homeowners were shrewd enough to escape from their homes and alert the police. Unfortunately, the suspect remained in the home, located numerous firearms that were in the residence, and armed himself.

Soon, other law enforcement personnel began to arrive at the home on Division Drive. The officers were accosted by the now armed suspect in the home, who brandished a handgun. Within moments, the suspect began to fire various types of firearms at the officers who had gathered outside the residence. One of those officers, Sergeant Chris Ambrose of the Marshall Police Department, was pinned down at the North-East corner of the home by the rapid-fire of the shooter.

The home that harbored the armed suspect was located on the south side of Division Street. When Officer Dan Riley arrived at the location, he parked his patrol vehicle to the east of the residence. Officer Riley immediately took cover behind some trees as the suspect started to fire at him while at the same time continued to fire at Ambrose who was still pinned down in the wooded area. By this time, the gunfire had also disabled one police vehicle and shots peppered other vehicles in the shooting scene.

The suspect continued the barrage of gunfire at the officers when ADPS Chief Scott Kip arrived with an up-armored Hummer. Officer Riley immediately relayed to him the urgency of removing Ambrose from the constant life-threatening gunfire from the suspect. Riley immediately got onto the driver’s side rear bumper of the Hummer, and Kip proceeded to drive into the wooded area where the sergeant was pinned down. The armored side of the Hummer was facing the house where the suspect was barricaded.

The suspect, however, continued the gunfight with the officers still at the scene, and the stand-off continued.

The Calhoun County Special Reaction Team (SRT) arrived at the scene, and they were preparing to assault the home. SRT team members Deputies Todd Madsen and Kevin Mahan, along with two other Deputies, cautiously advance toward the residence with Mahan leading the team with a bulletproof shield. They planned to enter the home and engage the suspect. As they approached the home, however, Deputy Madsen could actually see the suspect. Knowing the man remained heavily armed with multiple weapons, Deputy Madsen made the decision to shoot the suspect to avoid the possibility of a violent gunfight with the SRT officers. Deputy Madsen fired his weapon at the suspect, striking and rendering him incapacitated. The SRT was then able to secure the scene without further action.

It is because of Deputy Mahan’s courage and Deputy Madsen’s level-headed, heroic actions that lives were saved instead of the possible carnage that the suspect seemed to want to cause that day. Deputy Madsen, for your bravery and exceptional police work, the Police Officers Association of the Year presents you with the 2020 Police Officers of the Year award.

Deputy Mahan, for his courage in protecting fellow officers, the Police Officers of Michigan presents you with the 2020 Distinguished Service Award.

Without Officer Riley’s quick thinking, expert training, and ability to remain professional, the outcome of the gunfight may have ended quite differently for the Sergeant Ambrose and for Officer Riley. Officer Riley, for your bravery and exceptional police work, the Police Officers Association of Michigan presents you with the 2020 Police Officers of the Year Award.