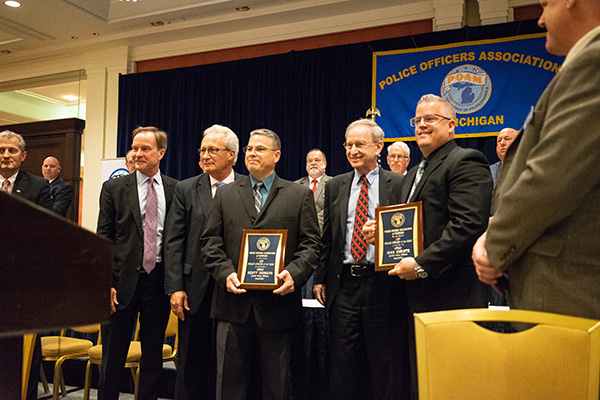 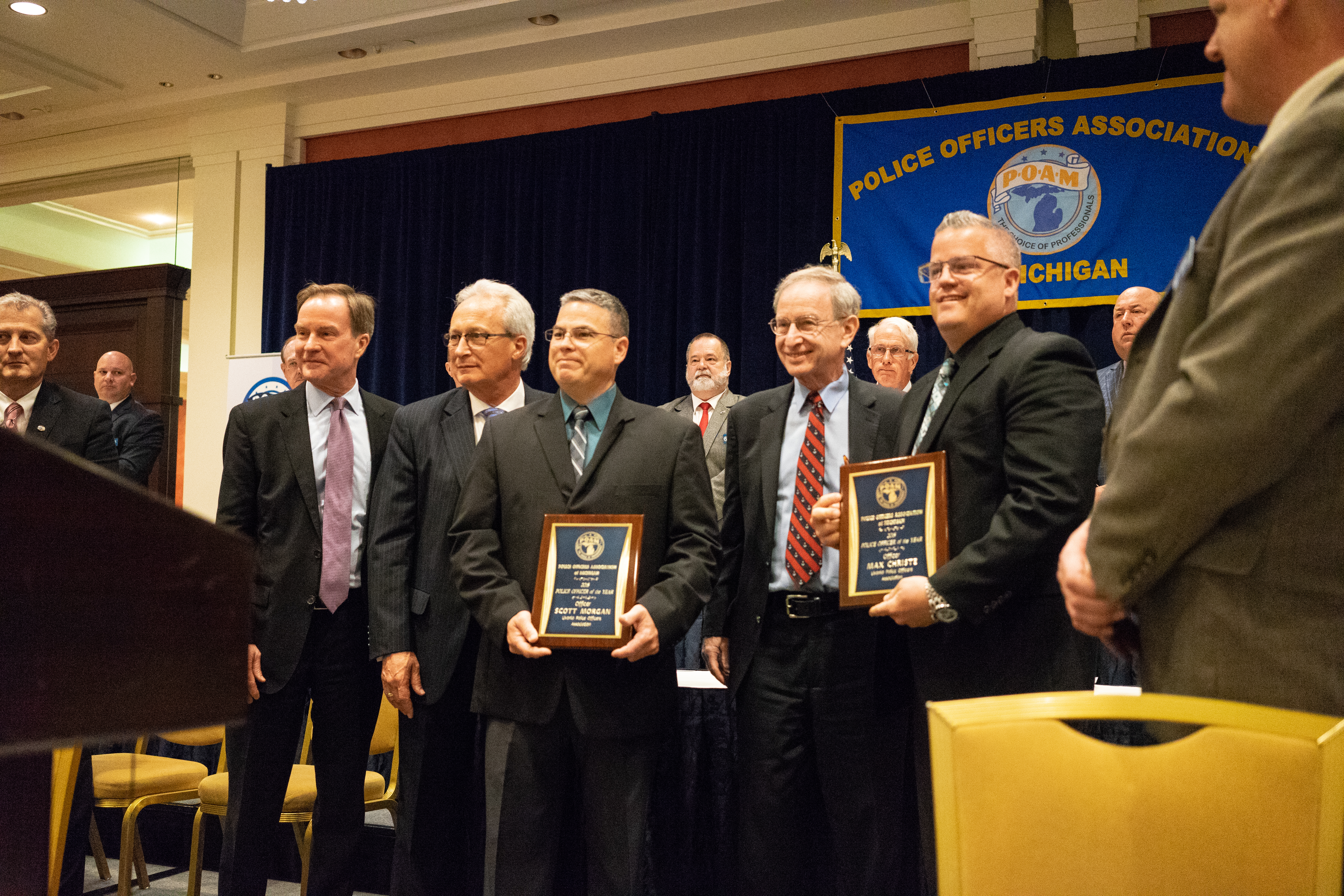 His face stained with his own mother’s blood, her dead body left in his merciless wake, a 22-year-old Westland man created an atmosphere of terror in a quiet Livonia neighborhood one afternoon last December.

Only the brave and relentless actions of Livonia Police Officers Scott Morgan and Max Christe, with assistance of officers from neighboring Westland, brought this matricidal murderer to justice and returned a sense of normalcy to the citizens that found themselves in harm’s way.

Close to two hours after the Westland Police Department had issued a bulletin for a man wanted in the stabbing death of his mother, Officer Morgan spotted a pedestrian matching the suspect’s description walking along Joy Road in Livonia, approximately five miles from the original murder site. After exiting his patrol vehicle, Officer Morgan confronted the man, whose head was down wearing a hoodie. Morgan demanded to see his identification, but he refused by stating he was only 17 years old.

When the man looked up for the first time, his face was no longer obscured by the black hoodie fitted strategically to hide his facial features. Officer Morgan observed dried blood on the man’s face. His appearance matched the overall description of the suspect’s photo that had been distributed by the Westland Police Department.

Officer Morgan immediately ordered the man to get down on the ground and he radioed Livonia dispatch that he had located a man matching the suspect’s description. After refusing Officer Morgan’s order, the man fled on foot toward a nearby subdivision. Aware that the man was likely still armed with the knife used to slit his mother’s throat, Morgan discharged three rounds at the fleeing suspect. He informed dispatch that shots had been fired and he was now in pursuit.

After disobeying several orders to stop and drop, the suspect finally fell to the ground, his right thigh bleeding from a gunshot wound. Once apprehended, the suspect was found to have the kitchen knife that killed his mother tucked in his pants pocket.

The dangerous pursuit of the suspect had forced a lockdown at nearby Livonia Franklin High School and the closure of main roads, including Joy. If not for the heroic actions of Officers Morgan and Christe, the knife-wielding man would have maintained his freedom and remained a threat to life in the surrounding neighborhoods.

For their bravery and beyond-the-call-of-duty actions, the Police Officers Association of Michigan would like to present Officers Morgan and Christe with the 2018 POAM Police Officer of the Year Award. 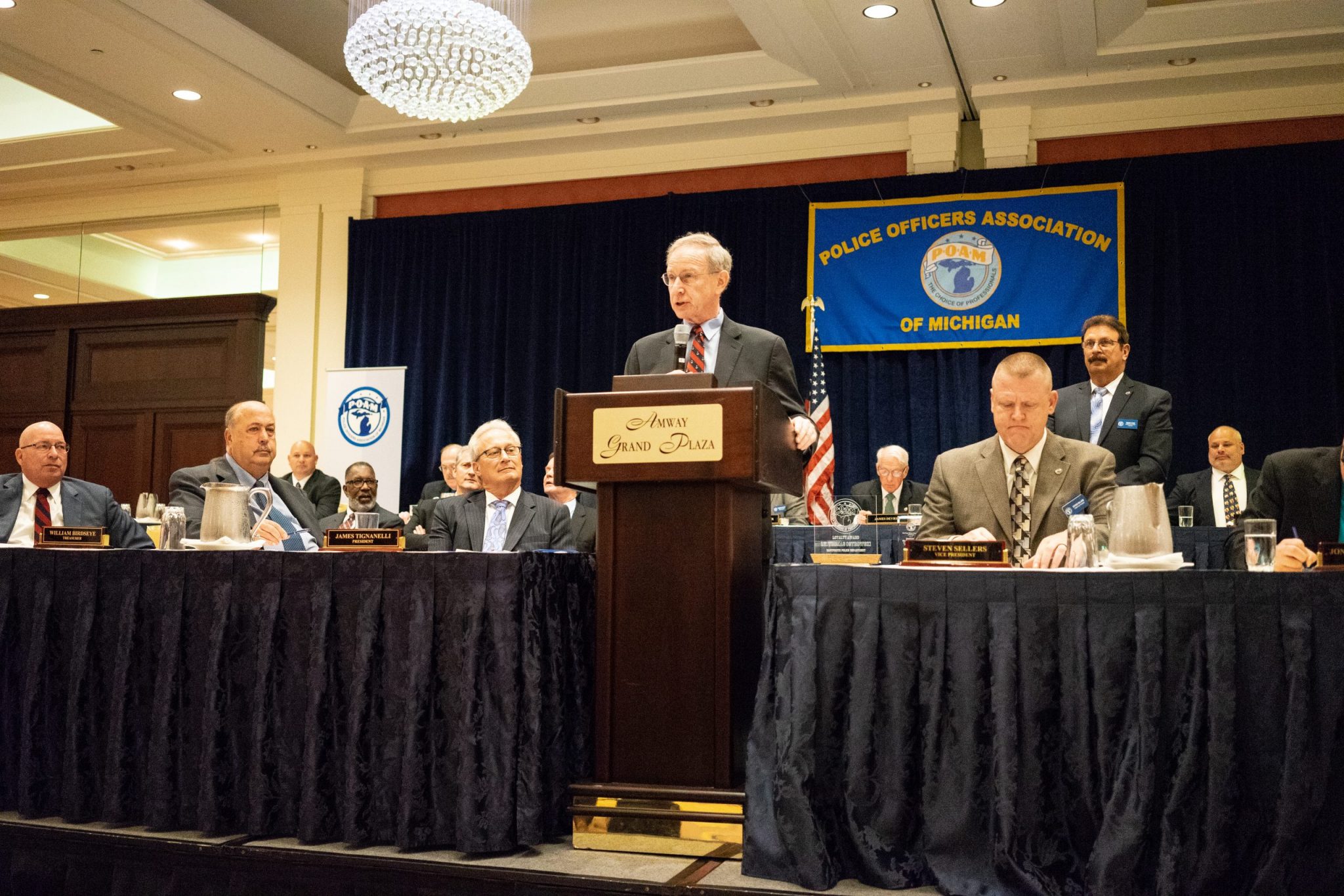 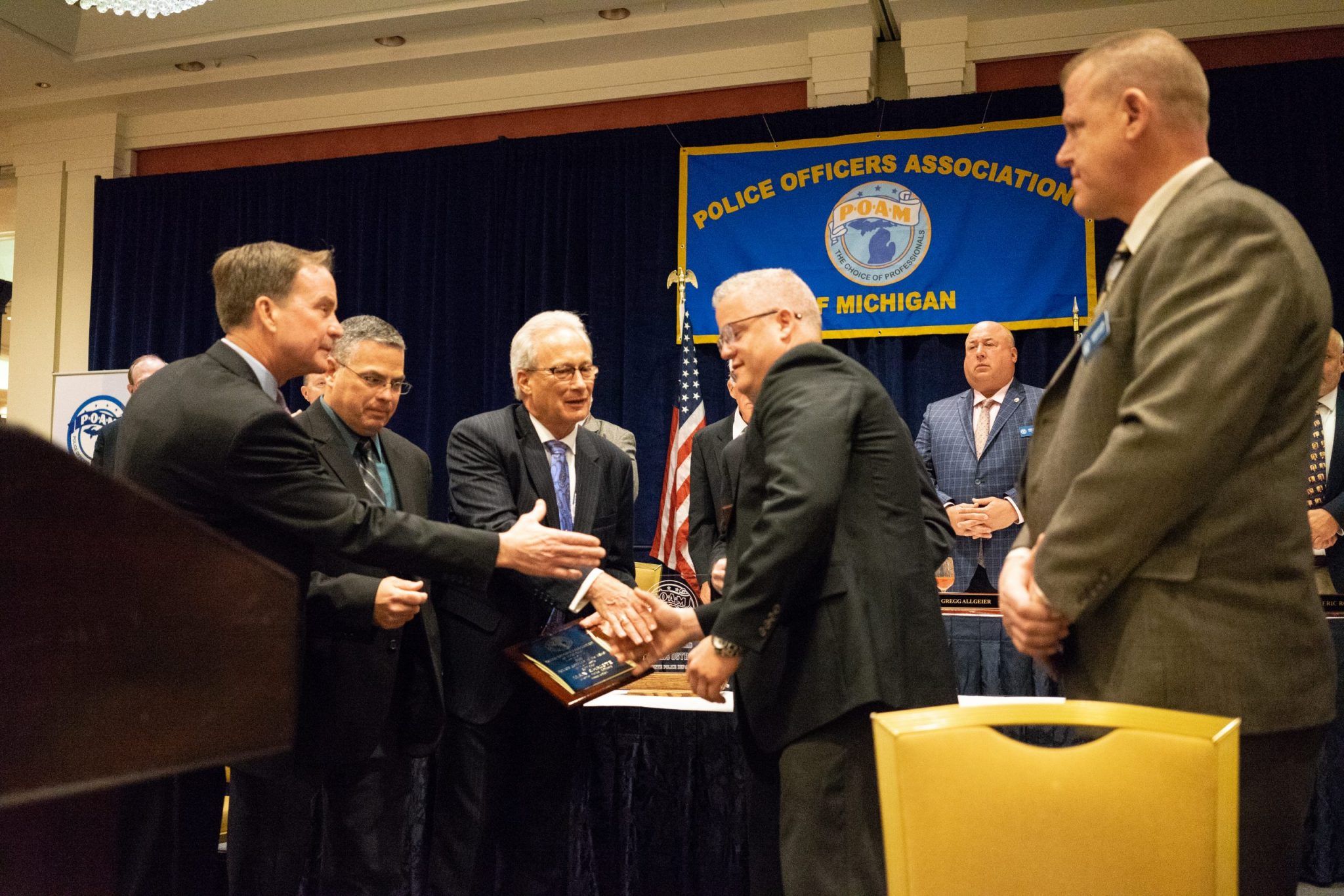 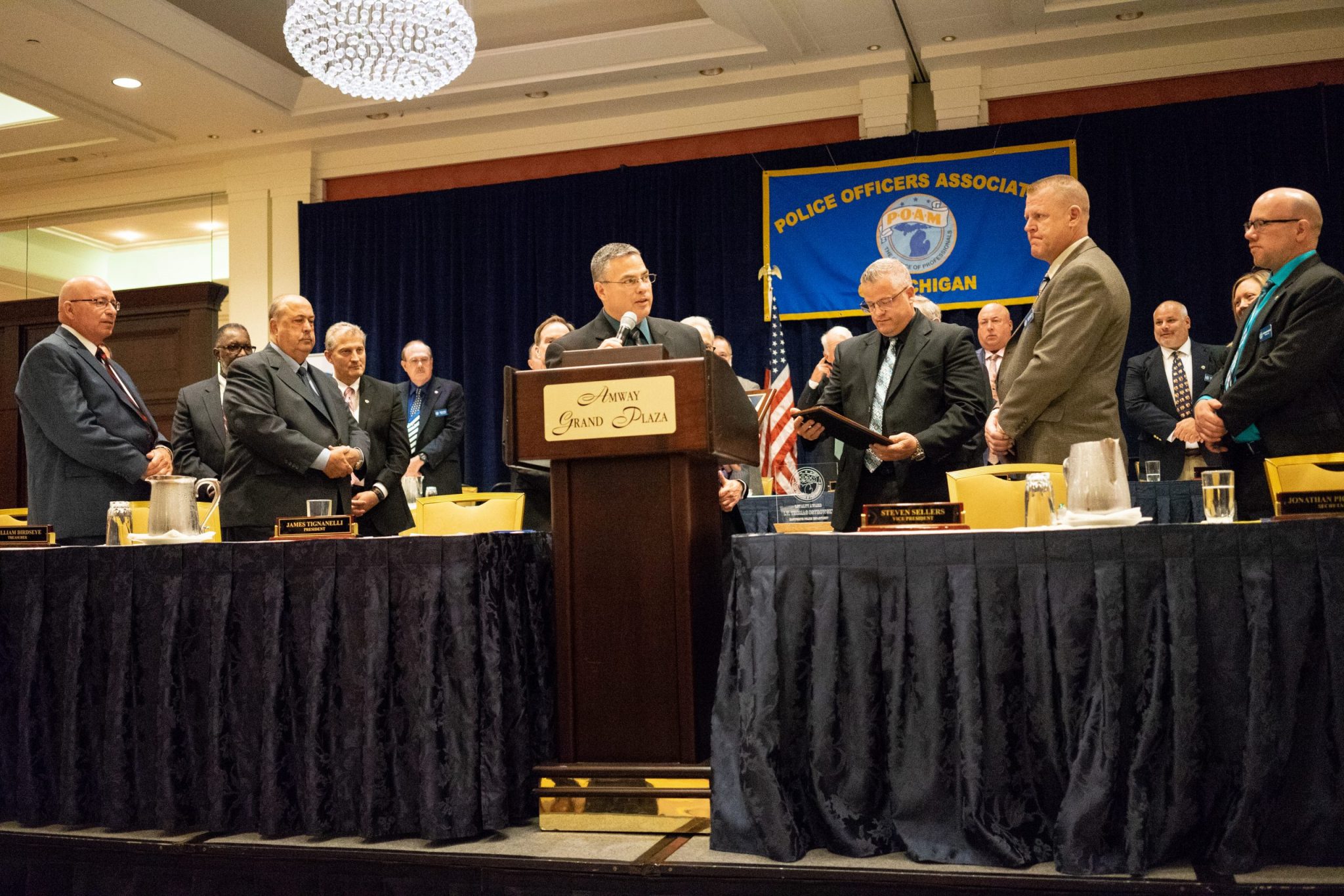 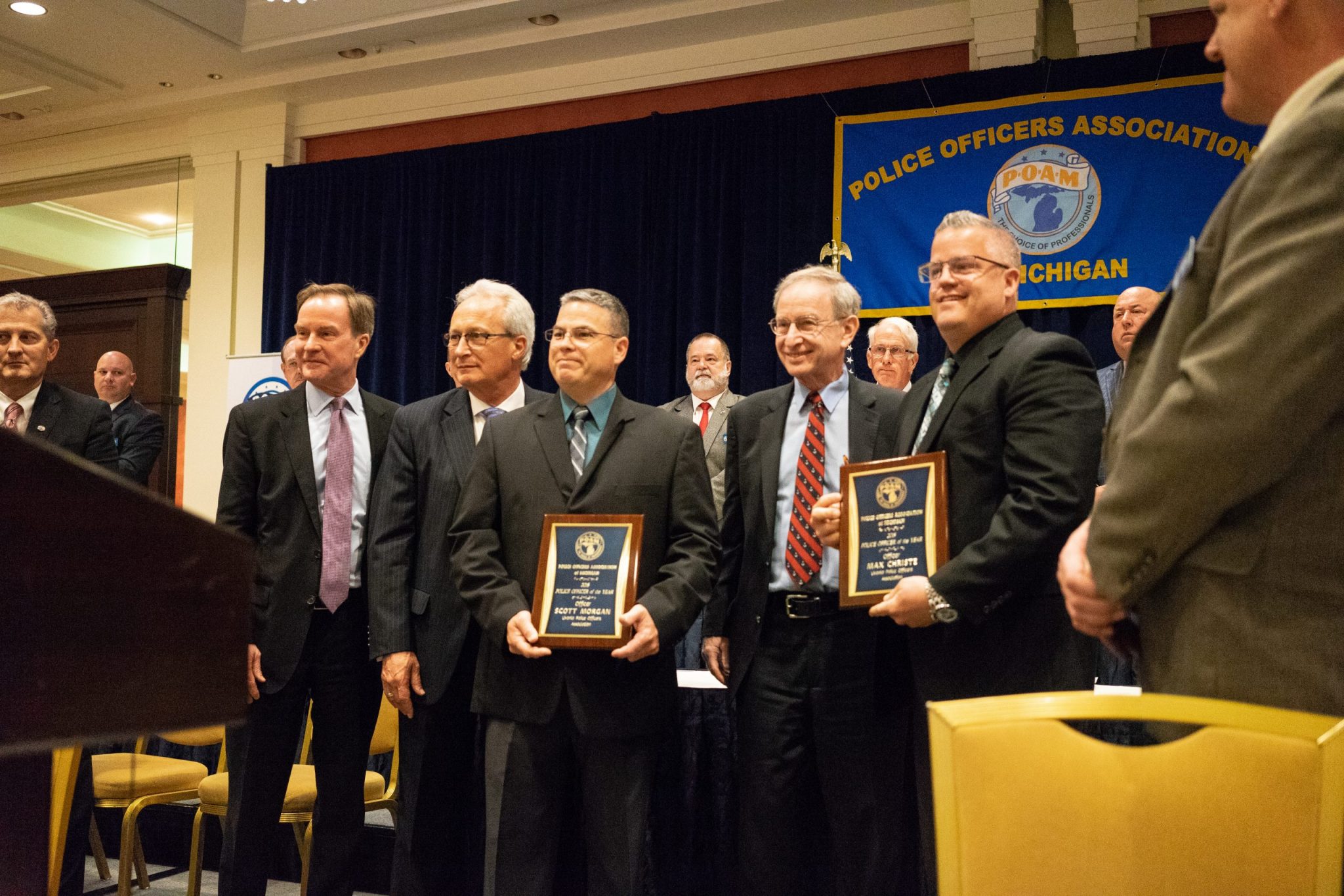