Convention 2022 P.O. of the Year: Deputies Fachting, Clayton, and Roy 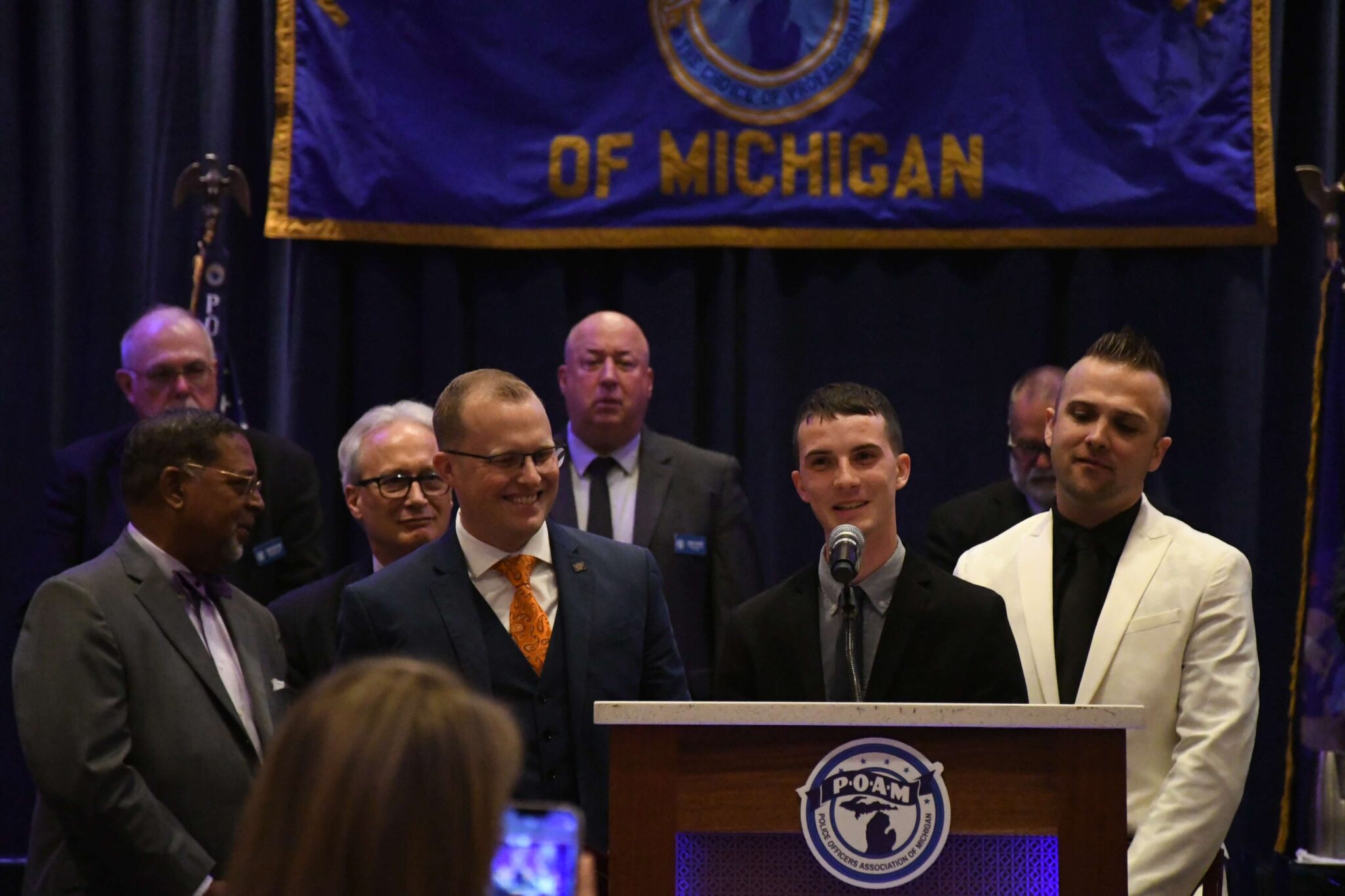 The Police Officers Association of Michigan recognizes and awards officers who show great courage and passion in serving the community. For bravely risking their lives and showing great compassion while performing their duty, Genesee County Deputies Brandon Fachting, Deputy Dustin Roy, and Paramedic Deputy Sean Clayton are recipients of the 2022 Police Officer of the Year Awards.

On December 21, 2021, Deputy Fachting, Police Officer Dalton Christie, and other units responded to a call about an armed suspect carrying a semi-automatic weapon in his right hand in the Burton area. Deputy Fachting and Officer Christie came face to face with the suspect. Instead of surrendering peacefully, the armed suspect attempted to escape, prompting a dangerous foot pursuit.

Deputy Fachting and Officer Christie chased the suspect through a residential area where he attempted to scale a rickety heavy fence. The fence collapsed on top of the suspect, pinning him to the ground.

When the two officers approached him in an attempt to remove the fence on top of him, he got violent and fired shots at both officers. The two officers were wounded, but they returned fire. Deputy Fachting fatally wounded the suspect on the scene, ending the threat.

Officer Christie sustained multiple gunshot wounds to both legs, and he applied a tourniquet first aid to both of his legs. Unfortunately, Deputy Fachting was badly wounded and suffered multiple gunshots to his chest and abdomen. Due to his injuries, Deputy Fachting couldn’t administer any lifesaving measures to himself. Despite his trauma, he was still able to communicate and relayed the message “E26, I’m hit” to his fellow officers.

Deputies Cayton and Roy Steps Onto the Scene

Deputy Sean Clayton and Deputy Dustin Roy, who were also on the scene, heard the call and quickly located the two injured officers. Not wanting to waste any more precious time, especially with Deputy Fachintg’s critical condition, Deputy Clayton and Deputy Roy carried Deputy Fachting and put him at the back of their patrol vehicle. They then raced him to Hurley Hospital. Officer Christie was also transported in Deputy D. Smith’s patrol car to the same hospital as Deputy Fachting.

At the back of the Tahoe police vehicle, Deputy Clayton removed Deputy Fachting’s vest to administer first aid to his wounds. Although his injuries were severe, Deputy Fachting told Deputy Clayton that he was suffering from a collapsed lung and needed a needle decompression — all thanks to his training as a paramedic. Luckily, Deputy Roy always carries needles with him for easy access when he’s on duty as a Paramedic Deputy, saving them the precious time of stopping and taking the first aid box from the back of the vehicle. Deputy Clayton then administered needle decompression, giving Deputy Fachting enough precious time to survive until lifesaving surgery.

Both officers were rushed to emergency surgery and were stabilized. Although the road to rehabilitation will be long for both officers, they are expected to make full recoveries and have long and fruitful careers in the police force.

The courage of Officer Christie and Deputy Fachting kept the residents of the Genesee Country safe. As well as the quick thinking and expertise of Deputies Clayton and Roy involved to keep them alive. For exceptional police work, the Police Officers Association of Michigan presents these three deputies with the 2022 Police Officer of the Year Awards.