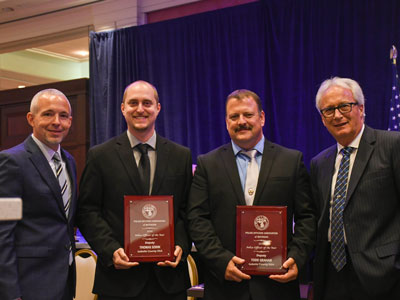 During the late evening of November 15, 2020, many law enforcement units, including the Isabella County Sheriff’s Department, responded to an armed robbery alert that had just happened at a Speedway gas station on East Pickard Street in Mount Pleasant. Within minutes of this robbery, another alert was given for an armed robbery at the Citgo on Pickard Street, also located in Mount Pleasant. Deputy Todd Graham of the Isabella County Sheriff’s Office responded to the Citgo call.

The description of the suspect at each incident matched, and the officers knew they were in search of the same man. The suspect was thought to be driving a small silver vehicle. It was decided that the suspect may be intent on hitting another gas station that evening. Deputy Graham, now accompanied by Deputy Thomas Szidik, also of the Isabella County Sheriff’s Office, and a State Trooper all went to the Marathon station at Lincoln and Remus to see if they could spot the suspect. When they arrived, they saw a small silver vehicle parked awkwardly at the pumps. The officers all concurred this was probably the suspect and the car that they were looking for.

Deputies Graham and Szidik and the Trooper parked their cars to effectively form a triangle around the west entrance of the gas station. All of the officers approached the front of the building and observed the suspect and one gas station employee through the glass doors and windows. The armed suspect exited the door, and the officers converged upon him. The suspect hesitated, and he was told to get his hands up. He did not comply and instead sprinted toward Deputy Szidik who was near the robber’s car and made an attempt to get into his silver vehicle and getaway. The suspect fired at officers Graham, Szidik, and the Trooper while trying to escape, and the officers began to shoot back. Officer Graham was wounded in the exchange of gunfire. The shooter was finally subdued due to multiple wounds. The suspect’s gun was recovered and, without further harm, the suspect was sent to the hospital for life-saving surgery.

For your bravery and exceptional police work, the Police Officers Association of Michigan presents Deputy Todd Graham and Deputy Thomas Szidik with the 2020 Police Officers of the Year Awards.