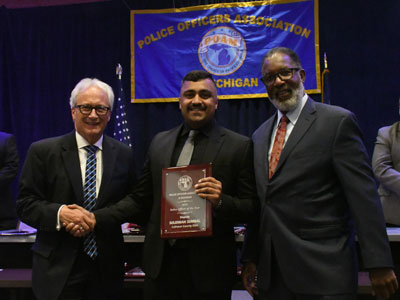 According to the suspect’s family, this individual suffered from severe obsessive-compulsive disorder (OCD) and was bipolar as a result of contacting the COVID virus. Initially, the suspect greeted the officers cordially. When one of the officers attempted to serve the order, the suspect started to become hostile and tried to shut the front door as he fled further into the residence.

The mentally ill suspect disappeared around a corner in the home and was able to quickly access a handgun. The sergeant who followed the suspect into the house immediately saw this and yelled to his fellow officers “gun!” The officers, including Deputy Suleiman Sumbal who were following the suspect and the sergeant, retreated toward the front of the home and exited. The armed suspect soon after appeared at the front door as the officers were attempting to find cover.

The suspect then leveled his firearm to shoot one of the Marshall Officers, who while turning in an attempt to engage the suspect and lost his footing and fell to the ground. That encounter enabled Deputy Sumbal to take aim at the suspect and shoot him and stopped the suspect from firing on the Marshall officer as he fell to the ground. The suspect was not mortally wounded and several more rounds were fired between the officers and the suspect until the suspect received further injuries. However, the wounds were never fatal and instead of giving up the suspect again retreated into his residence and barricaded himself inside. He did, however, eventually surrender without further incident, and the suspect was taken into custody. When he recovered from his multiple wounds at the hospital, he remained in custody facing charges on three counts of attempted murder.

Because of Deputy Sumbal’s quick actions and engagement of the suspect, he likely saved a fellow officer from injury or death. Officer Sumbal deserves recognition for his excellent service. For your bravery and exceptional police work, the Police Officers Association of Michigan presents you with the 2020 Police Officers of the Year Award.