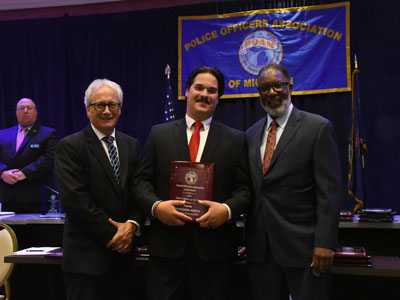 Just after midnight on September 5, 2020, Battle Creek Police Officers engaged in a vehicle pursuit. The driver had been swerving in and out of traffic and driving erratically before the chase began. When officers attempted to pull him over, the suspect fled at speeds over 90 miles per hour. Deputy Brandon Hatch of the Calhoun County Sheriff’s Department overheard the call from the Battle Creek Officers and went into the vicinity of the pursuit.

Deputy Hatch found the suspect as he fled down a dark roadway into an industrial park. Eventually, the suspect lost control of his vehicle and crashed into a wooded area, possibly immobilizing his vehicle. Hatch and the other officers in the pursuit exited their cars in an attempt to apprehend the suspect. The suspect was told by officers to shut the vehicle off. He did not comply; instead, the suspect started to rev the still-running engine. It was at this point that Deputy Hatch saw the suspect was able to drive his vehicle. He swerved out of the wooded area, aimed his car toward a fellow officer, accelerated in an attempt to run down the officer, and fled the scene.

Fearing the suspect would hit the Battle Creek officer with his car, Deputy Hatch, along with the other officers, shot the suspect and wounded him before he was able to reach the officer. After being wounded, the suspect’s vehicle then coasted harmlessly towards the woods where it came to a rest.

If Deputy Hatch had not been leveled headed and able to respond to the situation quickly, the suspect may have taken the life of a fellow officer. For this, he deserves recognition for his actions. For your bravery and exceptional police work, the POAM presents you with the 2020 Police Officers of the Year Award.