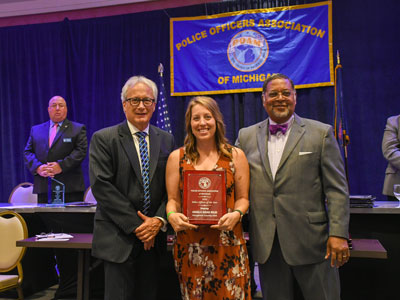 On April 12, 2021, just after 9 p.m., shots were fired from a residence on West 21st Street in Hubbell. The caller, who was the resident of the home, said he heard the suspect shoot off four rounds within the home that they shared. The caller also stated he thought the shooter, a female, had run out of the residence but wasn’t certain.

Deputy Angela Susan Miles of the Houghton County Sheriff Department was one of the officers who responded to the call. Deputy Miles parked her patrol vehicle across the street from the home, and she and the other responding officers approached the residence to talk to the caller who was now standing outside the house. The caller was still unsure whether the suspect was in or out of the house, so the officers cleared the home. The caller was then advised to go back into the residence.

While searching outside the home with flashlights, they observed a person in a pickup truck that was parked towards the rear of the house. She was the shooter and armed. The officers took cover and commanded her to put her weapon down. The suspect eventually got out of the vehicle but waved her pistol in the air. Deputy Miles retreated and took cover at her patrol car. She turned her car’s left alley light on to illuminate the suspect’s position better.

The suspect was given many verbal orders to drop her weapon, but she did not comply. Instead, she began to scream expletives at the officers, daring them to shoot her. At one point, the armed female put the gun to her right temple but then lowered it. Then she quickly turned around and headed back toward the front door of the home. She got to the front porch, opened the screen door, and began to enter. Knowing the other resident was in the home and afraid for his life, Deputy Miles fired at the suspect as she entered the house. Despite being wounded, she still got inside. However, shortly after the caller came out of the front door with the suspect’s firearm, he told the officers the suspect was in the home with a gunshot wound. Deputy Miles entered the house and immediately began life-saving first aid on the suspect. Deputy Miles stayed with the subject while the suspect fell in and out of consciousness mumbling numerous times that she wanted to die. Deputy Miles went with the subject as she was transported to the ER.

Deputy Miles deserves recognition for her ability to stay calm and confident in a tense situation and to react quickly to help stabilize the suspect while waiting for emergency services that helped save the suspect’s life. For your bravery and exceptional police work, the Police Officers Association of Michigan presents you with the 2020 Police Officers of the Year Award.