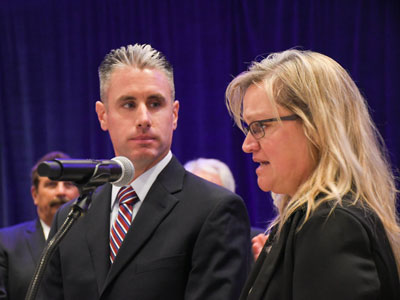 On September 27, 2020, the Dearborn Police Department was contacted by a female resident at an apartment complex on Park Street, stating that a male had a knife to her neck. Officers were immediately dispatched to the location. While en-route to the complex, the officers were warned by the dispatcher that she could hear a male voice on the phone say, “not to enter or there will be harm.”

Numerous officers arrived at the scene, including Corporals Jennifer Jackson and Brenton King. Some officers stayed outside to maintain the perimeter to prevent the barricaded suspect from escaping, while others, including Officers Jackson and King, stood by prepared to go inside the apartment complex once the correct apartment was located and called for entry. The officers identified the apartment and attempted to make unsuccessful verbal contact many times with the victim and suspect. During this time, the officers could hear a disturbance inside the apartment. Officers heard a female voice asking for help and finally a male voice asking for a hostage negotiator.

During this standoff, the officers received continual updates from dispatch, and the latest warning being that the woman on the call said she had been stabbed already, and he was continuing to stab her. The officers on the scene could now hear the woman screaming for help.

It became apparent they could no longer stand by, and immediate action had to take place. Officers Jackson and King announced they were going to enter the apartment, and Corporal King kicked down the door. As King and Jackson entered the apartment, they saw the suspect stab the woman in a nearby bathroom. Corporal King quickly stopped the attack when he shot the suspect. With the danger now contained, the officers were then able to turn their focus to the victim. They immediately advised dispatch that they had a female with multiple stab wounds.

The severely injured victim was removed from the scene of the shooting by Corporal Jackson to a secure place. Jackson observed she had several lacerations, one, in particular, was on her neck and was causing a profuse loss of blood which resulted in the woman going into shock. Corporal Jackson instantly began to explain to the woman that the wound on her neck needed to be controlled to stop the bleeding and that Jackson would need to apply pressure to the wound. Corporal Jackson also advised the woman this would be painful, but absolutely necessary for survival. All the while Corporal Jackson rendered aid, she constantly talked to the woman with extreme compassion to help her through the unimaginable trauma.

Corporal Jackson stayed with the victim while she was transported to Beaumont Hospital. Doctors later told the officers that the woman would not have survived had Corporal Jackson not treated the wounds as she did.

Both Corporals Jackson and King demonstrated a high level of courage, professionalism, and teamwork that lead to their selfless act to save the woman being victimized by the armed and dangerous suspect. For your bravery and exceptional police work, the Police Officers Association of Michigan presents you with the 2020 Police Officers of the Year Awards.