After spending 26 years as a Police Officer-a job that Clifford West adored-he was forced to retired following a difficult diagnosis. In 2005, West was diagnosed with Inclusion Body Myositis (IBM), an incurable and rare muscle disease that resulted in the progressive loss of function in his extremities.   Everyday tasks that many take for granted like walking, turning a doorknob or carrying your young child, has been taken away from him.  However, this has not deterred his upbeat outlook on life.  As a father of four, he understands the importance of family and life fulfillment.  IBM has not stopped West’s involvement with the community, where he plays an active role in church fundraisers and donation drives. 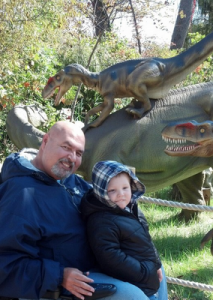 West’s mobility depends on his wheel chair and a modified car that gets him from point A to point B. However, with Michigan’s harsh winters, it has made travel almost impossible for him.  He is asking for help from his police family to cast a vote for him to win a custom wheelchair accessible vehicle from the National Mobility Equipment Deals Association (NMEDA) and their sponsors.  During National Mobility Awareness Month, a winner will be chosen!

Where Will Your Retirement Money Come From?

Get Ready for POAM’s Annual Convention 20 ...

2020 Police Officer of the Year Nominations